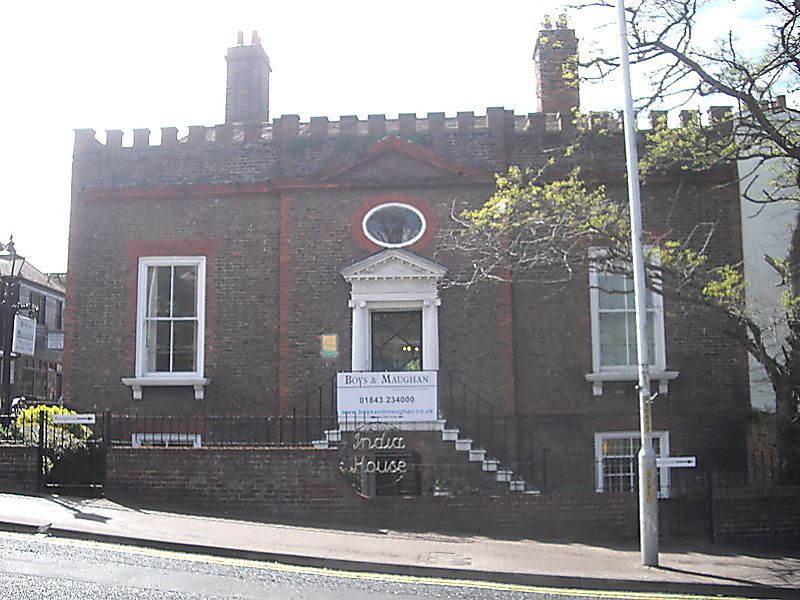 PLAN: Rectangular plan. Roof (hidden behind paparet) has complex plan suggesting that the house was an enlargement of an earlier building. It comprises a C-plan hipped roof on the front (E) east side, forming a rectangle with a similar but higher roof on the W side. Within this is a central axial roof set N-S with a chimney stack to each end. The lower (E) part of the house is one storey and the rear two storey, above a semi basement. The E, full-height part comprises the two principal rooms, one to either side of a broad central entrance hall, which leads through to a rear hall on the same axis; this has a room to either side. Stair compartment to the right (N) of the rear hall between the front and rear rooms. Two rooms to first floor. Breaches in N wall formed at basement and first-floor levels to link with No. 13 Hawley Street.

A stuccoed C19 garden entrance abuts the S wall with a moulded cornice on consoles; garden wall largely rebuilt and not of special interest.

HISTORY: Margate was one of the very earliest seaside resorts, developing from the 1730s as a fashionable destination for wealthy visitors (mainly Londoners) in pursuit of salubrious seaside air and seawater bathing, but also a desirable place to live. Like other C18 seaside resorts that developed around historic settlements, early expansion at Margate took place inland rather than along the sea front, developing northwards from the historic centre. Surviving buildings from that period include India House, Cecil Square (1769), the first Georgian square built at a seaside resort (qv), and Hawley Square (c1790) (qv).
India House was built by Captain John Gould (1722-84), a tea planter who made his fortune in Calcutta, who was appointed a Commissioner for Restitution after the Siege of Calcutta in 1756. He returned to England in 1766 and settled in Margate; this is possibly the earliest recorded example of retirement to the seaside. The theory that India House was a replica of Gould's house in Calcutta is, however, unsubstantiated. Gould is buried in St Leonard's Church, Upper Deal. After his death, the house was used as a local office of the East India Company. From 1897-1927, India House was the home of Phyllis Broughton, the celebrated music hall actress and 'Gaiety Girl'. Since that time it has been used as offices.

REASON FOR DESIGNATION: India House is designated at Grade II* for the following principal reasons:
* A highly unusual C18 house; possibly an early example of the genre of the eccentric seaside villa. The elements of the design are not unusual for their time; it is the ambitious way they are deployed that lends the building its unique character: a crenellated Palladian villa on a diminutive scale;
* Good external brickwork and detailing;
* Interior features, including a fine, full-height entrance hall on a scale befitting a larger town house; an elegant stair, and overall good survival of joinery and decorative features;
* Of special historic interest as a status dwelling built by Sir John Gould, a wealthy 'nabob', which marks the C18 growth of Margate as one of England's earliest seaside resorts, and a fashionable place to live and visit.