A Grade II* Listed Building in Much Hoole, Lancashire 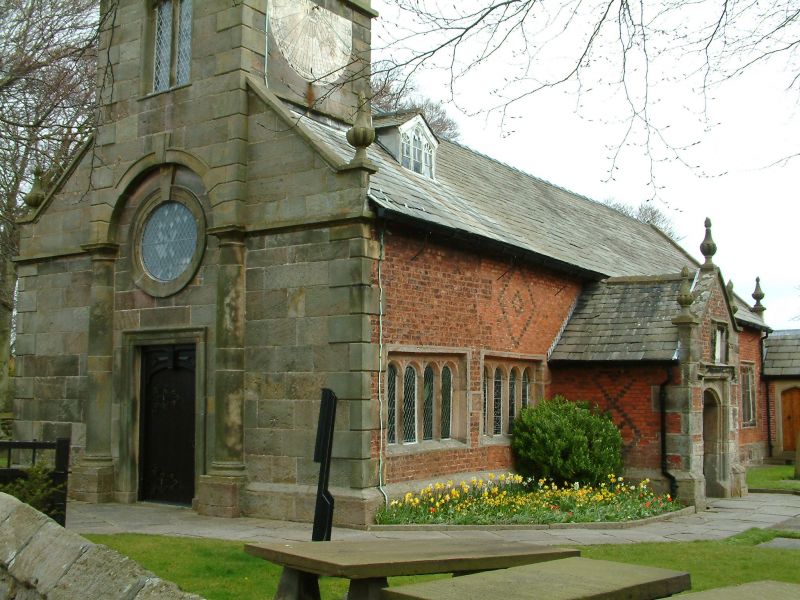 Church, 1628, of vernacular form, with west front and tower, 1722 in
classical style. Red brick on stone plinth, white ashlar tower, slate roof.
Single vessel incorporating tower which rises through the ridge at the west
end; short C19 chancel. Low gabled porch on south side has segmental
entrance arch with leaf spandrels and a hoodmould, above which is a tablet
with the words "PREPARE TO MEET THY GOD BELIEVE LOVE OBEY"; gable coping
has flaming urn finials on the kneelers and at the apex; inside porch is a
studded plank door in wooden doorcase with lintel lettered in relief
"1628", and painted Commandment and Lord's Prayer tables. Diaper patterns
of blue headers on side walls of porch and on nave wall to the left of it.
North wall has a flush doorcase matching the porch entrance, with a studded
plank door. Both side walls have round-headed stone mullion windows with
hollow spandrels: west of the doors two of 4 lights, and east of them three
similar but higher windows, the easternmost of 3 lights. The gabled west
front has a band at eaves level broken in the centre by a blank arch of
Tuscan demi-columns supporting a 2-stage tower which rises through the
tympanum. The arch embraces a door with moulded architrave, and its head
is filled with a large oval bullseye with moulded surround and keystone.
Gable coping has kneelers, one bearing a flaming urn finial. Tower has
rusticated quoins, bands on both levels, a rectangular window with 2
cusped lights, round-headed belfry openings each with 2 slated louvres, and
a battlemented coping with pinnacles; south wall of tower has- a large
painted sundial dated 1875. On nave -roof beside rear corners of tower are
gabled dormer windows which illuminate an interior wall where the eastern
corners of the tower are supported on an arch of free-standing Tuscan
columns. Interior of nave has low coved ceiling, galleries on the south
and west sides supported on iron columns and approached by a quarter-turn
stair with turned and splat balusters. Furnishings include: a fine raised
box pulpit with a sounding board, and in front of this a carved Cl7 desk
(not in situ); a polygonal font (on square pillar) lettered on one side
"DEO/DONUM/JOHAN/STONES/AN DOM/1663"; box pews, some with C17 bench ends;
and on south wall a Victorian tablet commemorating Jeremiah Horrocks
(Curate of Hoole and astronomer, d. 1641), and a large hatchment.
(VCH Lancs; Pevsner)