A Grade I Listed Building in Tonbridge, Kent 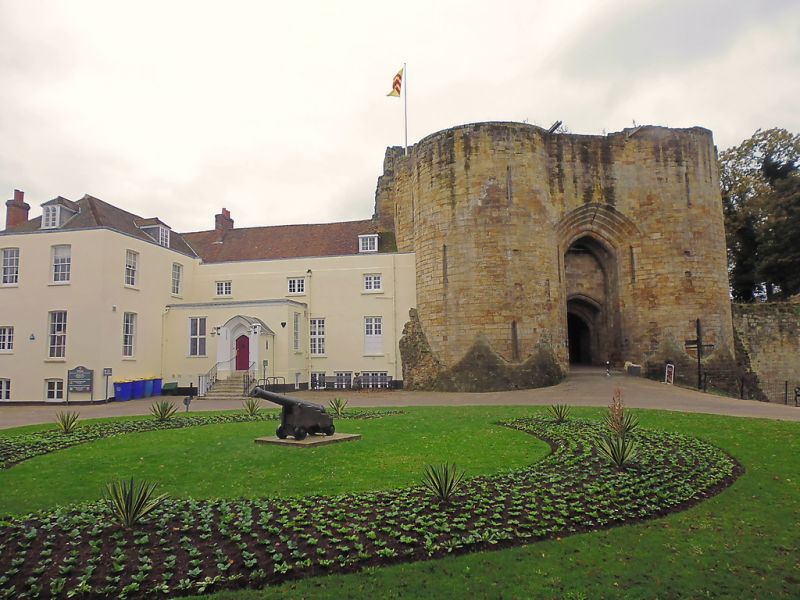 2.
The property and offices of Tonbridge Urban District Council. Of the Norman
Motte and Bailey the mound, surmounted by a few stones and containing the
well, now mostly filled up. This is surrounded by the moat on the north and
west sides which connects with the river Medway on the south. Of the C13
curtain wall surrounding the Keep, there survive a portion immediately to
the east connecting the mound of the Keep with the Gateway, a small section
to the south east of the Council Offices and a long portion on the south
fronting the Medway of which the top has been made into a walk in the grounds
of the Castle on account of the difference in levels to the north and south
of this. Between the first section of the curtain wall mentioned above
and the Council Offices is the Gate-house, built in 1230-1260. This is of
sandstone ashlar and consists of a large square building with a wide carriage
arch through it with 4 circular towers at its angles. High pointed arch
with its head recessed in 6 grooves. Within this a lower and less pointed
arch with similar head but above the latter a wall almost blocking the space
between the heads of the inner and outer arches but leaving a small gap for
the lowering of the portcullis with groove below. 3 square holes in the soffit
of the inner arch for dropping hot liquid. Embattled parapet above building.
Loop lights in flanking towers, and on ground floor of west outer tower an
oblique shoot to the dungeons. Within the archway pointed doorways lead to
the staircases. The rooms on first floor and hall above this occupy the
whole area of the building. The floors have disappeared but the fireplaces
remain. On the inner side the gateway is similar but the 2 arches are smaller
with another portcullis groove between them and 3 square holes in the soffit
of the outer arch. On the first floor above the arch are 3 trefoil-headed
lights and on the second floor 2 larger larger pointed windows with the remains of
cusping of the tracery. Loop lights in the towers, as on the outer side. To
the east of the Gate-house is an L-shaped house built in 1793 and now the
Council Offices. Ashlar, the stone taken from various portions of the Castle.
The main front faces south. 6 windows. 3 dormers. Windows with segmental
heads. Glazing bars missing in the lower half of them. Hipped dormers
containing casement windows of 2 pointed lights each. Parapet. Tiled roof.
On ground floor immediately adjoining the Gate-house is a large curved bay
with parapet over containing 3 large windows; the centre one now converted into
a door. This room is the Council Chamber. At the east end is a ground floor
addition, probably a conservatory originally, made in the thickness of a
further portion of the Castle walls with a parapet over. This ends in rough
masonry which was part of the Castle walls. Iris addition has large sash
windows with pointed heads, the lower part of one converted into a door.
To the east again is part of the rampart. The interior of the building
is C19 Gothic. Traces of the fosse of tile Castle can be seen between
Stafford Road and High Street. It then followed the course of Bordyke, and
remains are visible between this and East Street, now dividing the gardens
of the Vicarage and the Cedars, and south of East Street at the south east
comer of the garden of Lyons.