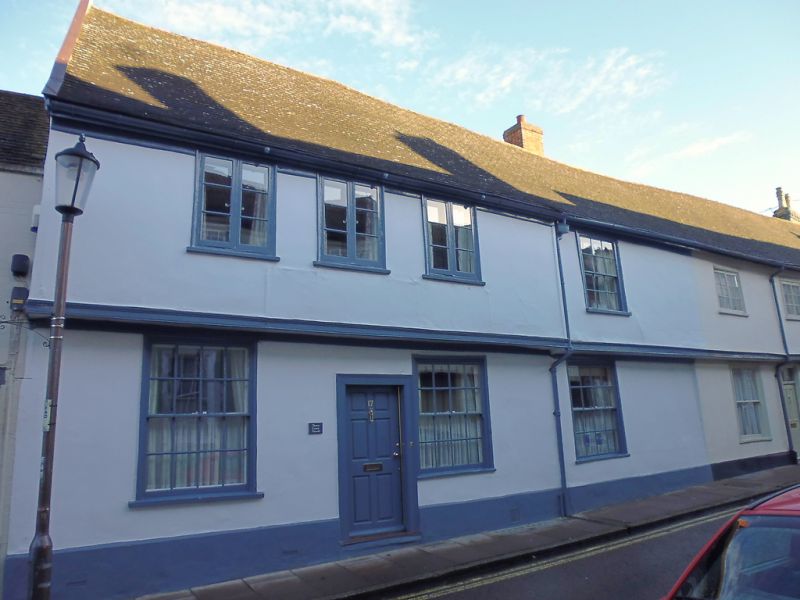 House; formerly an inn. C16 with C19 alterations.
Timber-framed and rendered; plaintiled roof with 3 small
cast-iron goats' heads on the eaves soffit; jettied along the
street frontage, with a slight break in the line of the jetty
indicating the junction of 2 frames.
EXTERIOR: 2 storeys. 4 windows to the upper storey: 3 2-light
casements with horizontal glazing bars only and one 12-pane
sash window in a flush cased frame. On the ground storey, 3
16-pane sash windows in flush cased frames. A 6-panel entrance
door in a plain surround.
The joist ends of the jetty are covered with a plain fascia
board. Plain wood eaves soffit. Later extensions at the rear.
INTERIOR: cellar accessible only from No.18 (qv). Frame in 4
bays. The end bay on the south formed part of the adjoining
house: dividing walls now removed. The 3 bays to the north
originally contained a 2-bay hall and 2 service rooms; this
layout was changed in the early C19. On the ground storey the
chamfered cross-beams have cut-off stops; original partition
walls all removed. A dado with raised fielded panels to the
principal ground storey room. A large brick chimney-stack
inserted at the south end has a plain cut-down cambered lintel
with a Tudor brick arch above.
On the upper storey part of the rear wallplate has been cut
away and the rear roof pitch has been made shallower. Some
good studding exposed with traces of red ochre colouring. A
shutter slide in the front wallplate. The former open truss,
now with a partition wall, has a peg-hole for a missing
crown-post in the tie-beam. A small gabled rear extension has
an upper room with C18 panelling to the fireplace surround and
doors.