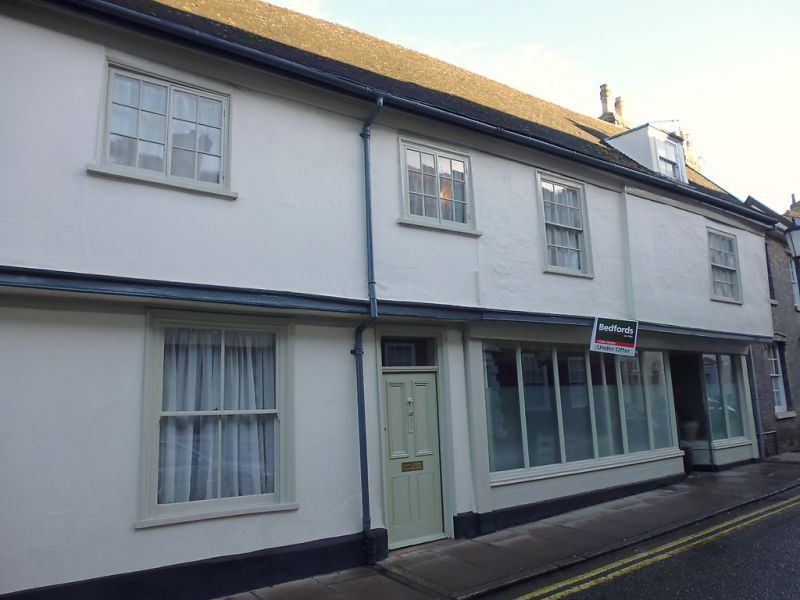 2 separate houses, early C15, now in one commercial
occupation. Timber-framed and rendered, jettied along the
street frontage; plaintiled roofs with a plain wood eaves
soffit.
EXTERIOR: 2 storeys, cellar, attic to part. 4 windows to the
upper storey, one 12-pane and one 16-pane sash, both in flush
cased frames and 2 small-paned 2-light casement windows. On
the ground storey, shop windows in traditional style with
vertical glazing bars only and a recessed shop door. On the
left, a sash window with a single vertical glazing bar in a
moulded flush cased frame and a blocked 6-panel door.
The joist ends of the jetty are covered with a plain fascia
board. 2 one-and-a-half storey rear wings. A gabled dormer in
the rear slope of the main roof.
INTERIOR: cellar, below No.18, used as offices: walls
rendered. One bay below front has a very heavy exposed timber
ceiling. There is a marked structural break between No.18 and
No.19 with a junction of 2 frames. To the right (No.19) a
single bay with a large chamfered main beam and cut off
triangle stops.
Above, on the upper storey a tie-beam with long arched braces
and a peg for a missing crown-post is immediately adjacent to
a studded partition wall with long tension braces. The rear
wallplate is a later replacement. A Tudor brick chimney-stack
with a plain cambered timber lintel links with a 2-bay rear
wing on the south, which has exposed timbers on both ground
and first storeys with the tie-beam of the central truss
removed.
A small stair beside the stack has the remains of Jacobean
splat balusters and 2 newel posts with open lantern finials.
To the left (No.18), in 3 bays, is divided into one 2-bay and
one single-bay room on the ground storey with a single open
area above. Main beams with a double ogee moulding and run off
stops to the single bay ground storey room at the north end
which probably extends into another bay in the adjoining house
to the north.
On the upper storey, 2 open trusses with slightly cranked
arched braces to chamfered tie-beams and jowled main posts. A
small rear wing on the north has poor quality timbering and a
clasped purlin roof.