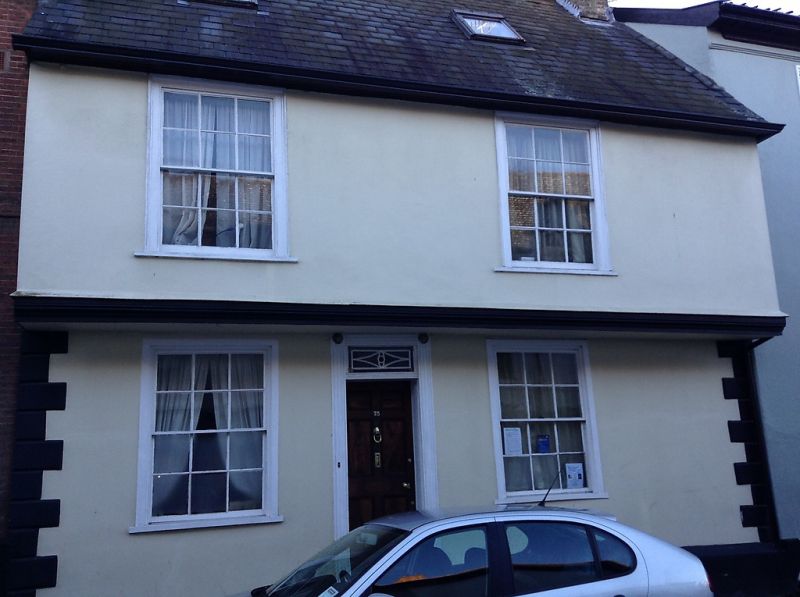 House. C16 with C18 rear extensions and front dated 1772.
Timber-framed and jettied along the street frontage; stuccoed,
with rusticated quoins to the ground storey; slate roof with a
moulded wood eaves soffit. At the rear, two 3-storey wings are
faced in roughcast with tiled mansard roofs.
EXTERIOR: 2 storeys, attics and cellars. 2 window range:
12-pane sashes in moulded flush frames. 2 roof-lights in the
front slope of the roof. Recessed 6-panel door up 2 stone
steps: fluted surround with panelled reveals; the rectangular
fanlight has ornamental glazing. The rear wings have 3 large
12-pane sash windows in flush cased frames to the 1st storey.
INTERIOR: cellar, below front and part of rear range, has
timber ceilings of varying dates and some flint walling. The
front range is in 2 bays with a small extension at the north
end: the end wall has a date panel which reads 'Trevall 1772'.
The ground storey main beams have double ogee mouldings and
rudimentary leaf stops and a small section of exposed joists
are roll-moulded. An original 5-light diamond mullioned window
on the rear wall; the mullions have been removed from a
corresponding window on the upper storey.
A small C18 fireplace surround on the rear wall has an eared
architrave. On the upper storey most of the rear wall has been
cut away. The end truss on the south has long arched braces
(one missing) to a cambered tie-beam without stud infill.
Remains of a crown-post roof from which the main crown-post
has been removed and later side purlins inserted. The attic
windows have original cast-iron fittings. An early C19 attic
stair has stick balusters and fluted mouldings to the newel
posts.