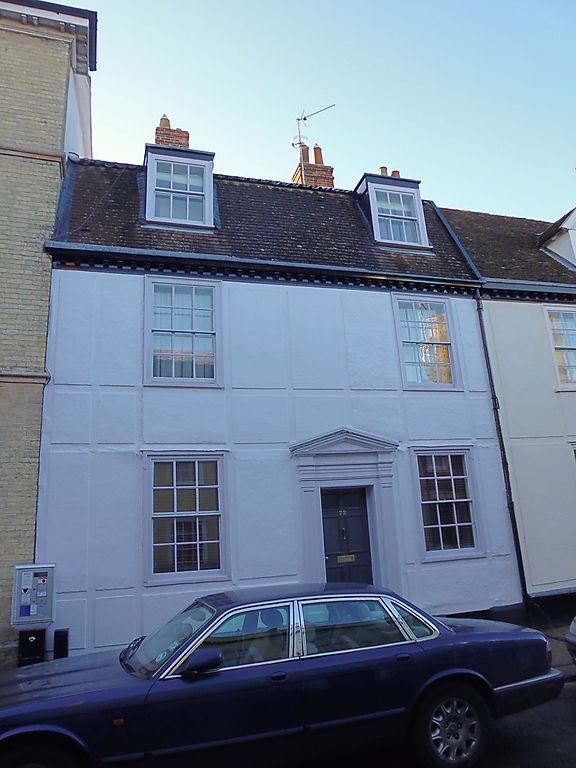 House. C18 front, early C17 and early C19 rear. Timber-framed
and rendered with raised roughcast panels; plaintiled mansard
roof.
EXTERIOR: 2 storeys, attics and cellar. 2 window range:
12-pane sashes in flush cased frames to both storeys. 2
flat-headed lead covered dormers have 6-pane sash windows. A
6-panel door with the top 2 panels glazed, up steps, has a
wood doorcase with plain reveals, panelled pilasters and
pediment. An internal chimney-stack has a plain square red
brick shaft with chimney-pots. A long rear range in 2 phases
of building.
INTERIOR: cellar below whole of front range: walling with some
old flint and render, but mainly C19 brick with various niches
inserted in 2 stages. Timber ceiling, part C18, part with
reused earlier joists. C18 front range in 2 bays with a C20
division into 2 rooms.
All earlier partitions removed, but the present entry,
formerly into a narrow early C19 corridor with a
semicircular-headed rear archway, may well be in the original
position. Fireplace with a mid-C18 eared wood surround. An
early C19 stair has stick balusters, closed strings, rounded
newel posts and a curved handrail.
A C17 2-storey rear wing in 2 bays has the main components and
some studding exposed on the upper storey; roofs covered.
Extending from this wing an early C19 range in flint and brick
with a mansard roof, said to have been used initially as a
corn store.