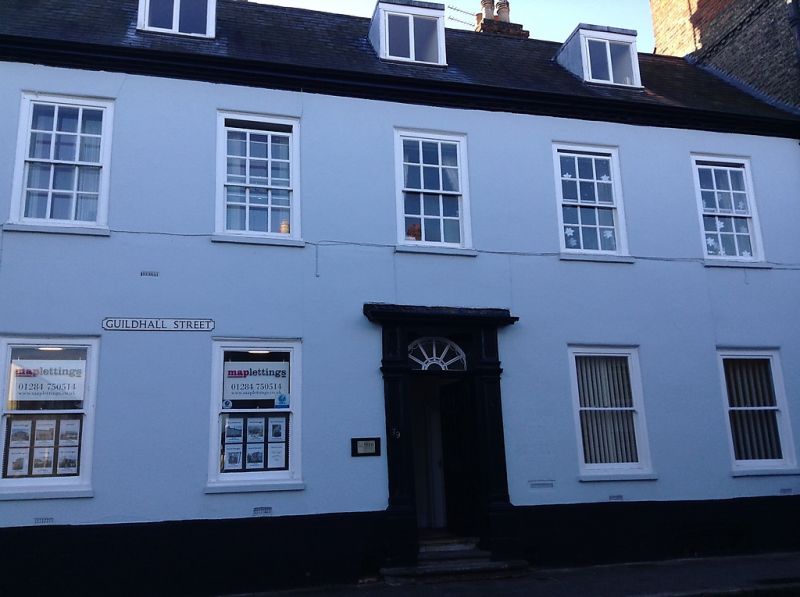 House, now offices and flats. C18 exterior with partly C12
core. Timber-framed above a plinth of stone blocks; roughcast.
Slate roof with a moulded wood eaves cornice.
EXTERIOR: 2 storeys, attics and cellar; 2 wings at rear. 5
window range: 12-pane to the 1st storey and without glazing
bars on the ground storey, all in heavy flush cased frames. A
central 6-panel door has a semicircular fanlight with radial
glazing bars and a doorcase with panelled pilasters and
cornice.
INTERIOR: cellar below the northern half of the front with
C18/C19 brick walls almost entirely to the south and east, on
the west mixed with areas of flint rubble. The north wall is
of flint rubble with various recesses. C15/C16 bridging beam
to ceiling, probably intended to rest on supporting piers;
C18/C19 joists.
Running through the ground storey from north to south is a
thick wall faced with ashlar blocks along its western face.
This contains a Norman doorway, which is at the back of the
present cross-entry, with a roll-moulded arch; the nook shafts
have capitals with volutes. At the south end of the wall is
another narrow doorway with a chamfered pointed arch, probably
dating from the late C12.
A low round-headed window with a chamfered arch, boarded over,
is half way along the same wall. This wall appears to extend
for the whole length of the building and may have a return
wall on the north between No.79 and No.80 (qv). 2 pairs of
tall timber columns with matching 'Norman' capitals are spaced
along the present cross-entry, one pair immediately inside the
entrance door.
A C17 rear wing on the south has a heavy main beam with large
chamfer and lambstongue stop with quirk and has been extended
into a later bay. A rear wing on the north now forms part of
the adjoining premises and has no exposed original features;
between the 2 wings is a flat-roofed extension containing a
stair with ramped handrail but with boarding covering the
balusters.