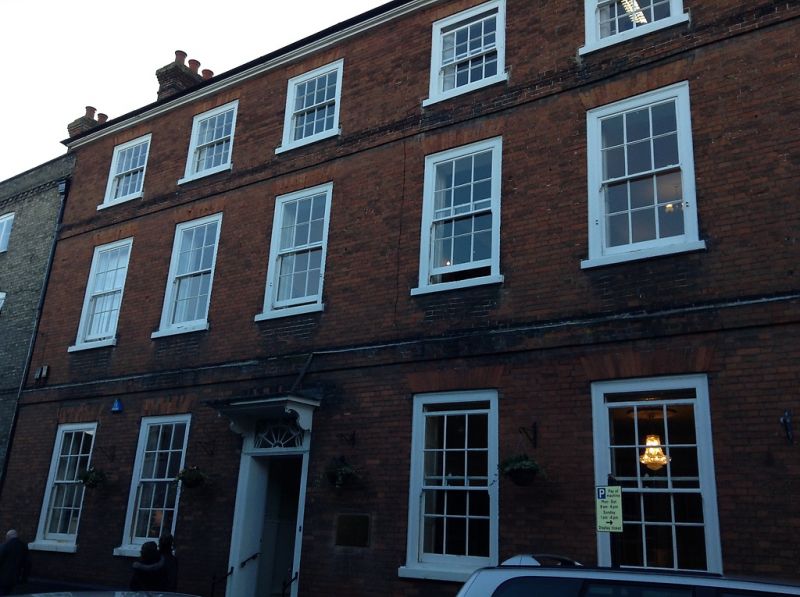 House, now offices. Early and later C18. Red brick with a
slate roof and moulded eaves soffit.
EXTERIOR: 3 storeys and cellars. 5 window range: 12-pane
sashes to the ground and 1st storeys and small 16-pane sashes
to the 2nd storey, all in flush moulded cased frames. A raised
brick band runs between each storey. A central 6-panel door in
deep reveals is up 3 steps with wrought-iron handrails: the
door has a rectangular fanlight with ornate glazing and is
surmounted by a flat cornice hood on shaped brackets with a
C18 wrought-iron lamp holder. A 3-storey stair wing with a
hipped roof projects from the centre of the rear wall, and
there are various C20 rear extensions.
To the south of the main house is a 3-storey block, formerly
included separately, but now forming part of the premises and
probably built as an extension to them. White brick to front
and side, red brick to rear; slate roof with a parapet and
brick dentil cornice. One window to each storey: early C20
3-light casements with transoms set in segmental-arched brick
surrounds. The doorway is blocked.
To the north of the main house is a small C18 flat-roofed
single storey extension which lies behind part of the linking
wall of No.81 (qv). This has an open arcade with pillars along
its north side.
INTERIOR: cellar partly brick vaulted, but at the south side
higher, with C17 ceiling beams. The interior retains many C18
fittings: 6-panelled doors with panelled surrounds, some with
eared architraves; panelled shutters and eared architraves to
many of the windows, the shutters with original metal
fittings. Many rooms have cornices with egg-and-dart ornament,
or with later foliage decorations.

In the ground storey room to the right of the entry is a heavy
modillion cornice and an alcove with fluted Doric columns and
fret decoration to the fascia. A fine mid-C18 stair runs the
whole height of the building: turned balusters, ramped moulded
handrails, open ornately bracketed strings, panelled dadoes.
A thick wall, apparently of stone or flint, runs through the
rear of the south end of the building and seems likely to be a
continuation of the C12 stone wall within No.79 (qv). There
may also be a stone return wall between the white brick
extension and the main front of the building. No.80 (south
end) was listed on 120772