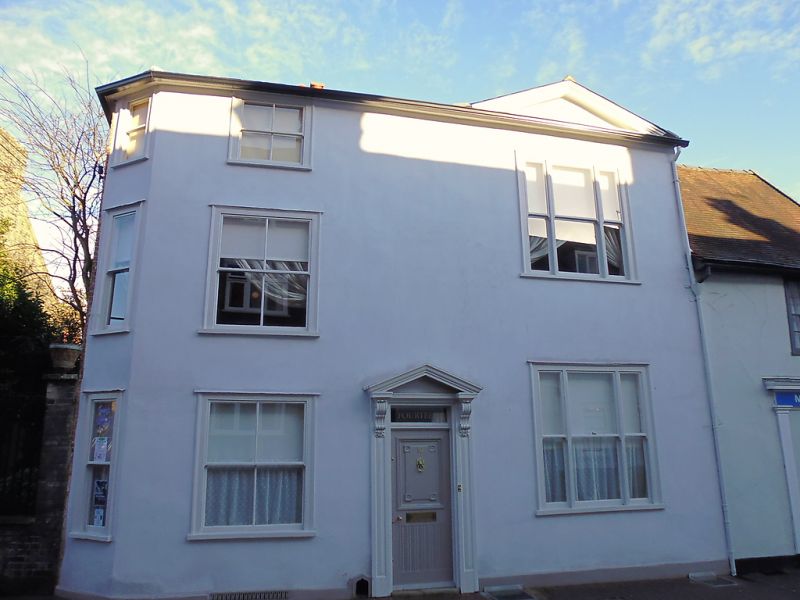 House. C16 and C19. Timber frame to part, red brick to north
side wall, render on south; roughcast to front. Slate roof.
EXTERIOR: part 2 storeys, part 3 storeys; cellar: the
structure falls into 2 separate halves. On the right, one
tripartite sash window without glazing bars to each storey,
and a shallow moulded and rendered triangular pediment rising
above eaves level. On the left, one sash window to each
storey, in graduating sizes, all with a single vertical
glazing bar, and another narrow sash window without glazing
bars to each storey on the splayed northern corner.
The 2-panelled entrance door has a wood doorcase with plain
reveals, panelled pilasters and an open pediment supported on
enriched console brackets. A rear gable to the northern half
of the house has random brick walling.
INTERIOR: cellar on 2 levels: on the right, brick-walled and
higher, on the left with flint and stone walling and a timber
ceiling. The northern half of the house forms a 3-bay wing at
right angles to the street: main ceiling-beams exposed on the
ground storey have a double ogee mould and run-off stops.
No part of the frame is visible above the ground storey and
the top storey is an addition, of the same date as the
southern half of the house, which has no internal features
prior to the C19. Both its ground and 1st storey rooms have
decorative plaster cornices and friezes with egg-and-dart
ornament and repetitive flower and leaf motifs.