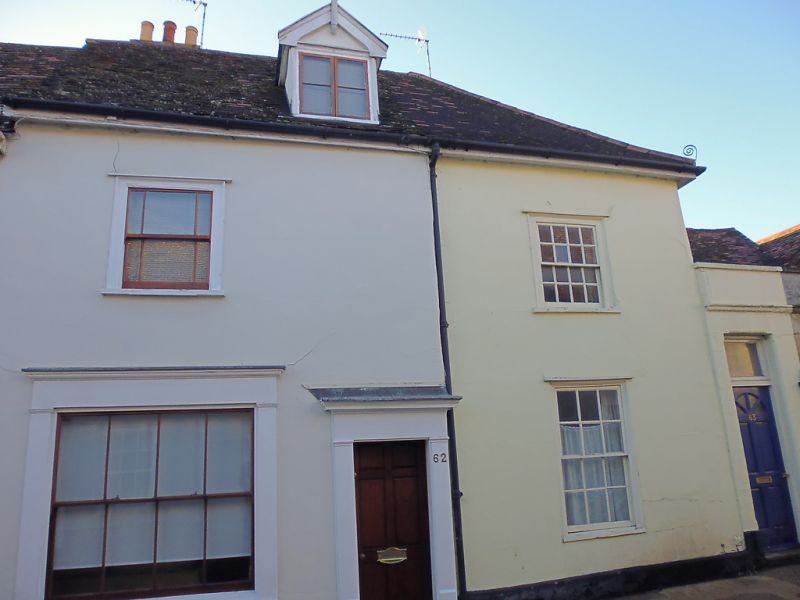 House, now divided into 2. Late C17/early C18 front range,
older rear to No.63. Timber-framed and rendered; plaintiled
roof.
EXTERIOR: 2 storeys, cellar and attic. Each half of the house
has one window to each storey: No.62 has a sash to the upper
storey with marginal glazing in a flush cased frame and a
former 8-pane C19 shop window to the ground storey with a wood
surround with plain pilasters and cornice. A gabled dormer has
shaped bargeboards, a hanging finial and a 2-light single bar
casement window. Recessed 6-panel door in a heavy wood
doorcase with panelled reveals, plain pilasters and flat
cornice hood, similar to that above the former shop window.
No.63 has a 16-pane sash to the 1st storey and a longer
12-pane sash to the ground storey, both in flush cased frames.
Entrance door on the north end, in a flat-roofed single storey
section of No.64 (qv) adjoining, has a plain rendered surround
and a rectangular fanlight.
INTERIOR: No.62: brick arched cellar below rear has walling of
rendered flint along the north wall and alcoves. The front
ground storey room has a boxed ceiling beam and corner
fireplace. A later rear wing has softwood beams and there is a
2-storey lean-to addition.
Attic with alate side purlin roof without a ridge-piece. No.63
also has a cellar below the rear wing: walls of flint with
thick old render, renewed ceiling. No features exposed in
front range. The entrance door leads into a narrow passage
with the original side wall on the left replaced by a series
of brick arches. 2-bay C15 rear wing, with timbers exposed in
walls and ceiling, has an original doorway on the north side
with renewed arched spandrels.
The ground storey ceiling is inserted, some joists being
reused rafters. Collared rafters to the roof above, but no
smoke-blackening. A narrow timber-framed section to the north
of the rear wing links the house with the back range of No.64
(qv).