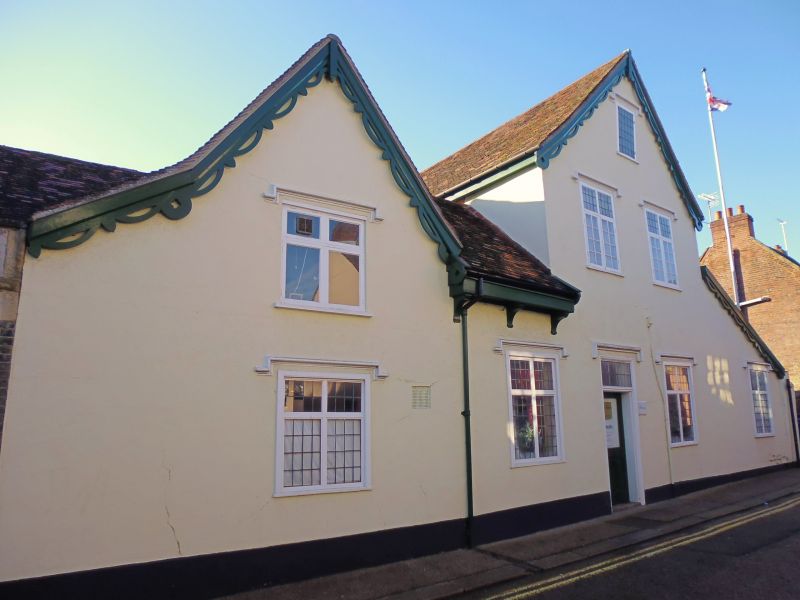 A pair of buildings, now linked into a complex group. C16 &
C17 core, with C20 alterations. Timber-framed and rendered;
part plaintiled, part pantiled roofs. No.64 has a front range
of one storey and attics, set gable-on to the street with
fluted bargeboards. A lean-to addition along the south side
and a single-storey C19 brick extension beyond it, part now
containing the entry to No.63 (qv), which adjoins on the
south. A 2-storey rear range is parallel to the street. No.65
is also set gable-on to the street:
EXTERIOR: 2 storeys, attic and cellar and a single-storey
lean-to along the north side. Matching pierced and fluted
bargeboards to the main roof and the lean-to. Extensive C20
rear extensions. The 2 gabled ranges are linked along the
street frontage by a single-storey section with a pitched
plaintiled roof. The windows, irregularly spaced across the
front, are all in the same style: 2-light early C20 casements
with transoms, square leaded panes and wood hood-moulds over.
INTERIOR: an extensive cellar below No.65 has partly flint,
brick and stone walling and a heavy main beam with joists on
edge; rear extensions to the cellars in the C19 are in brick,
but one old brick and flint wall runs east-west. Modernising
of the interior has left no original features exposed; main
beams boxed in.
The front range of No.64 has only cambered tie-beams exposed.
A rear range,not inspected, parallel to the street, is part of
this complex but is not accessible from the front of the
building, and may well be of interest.