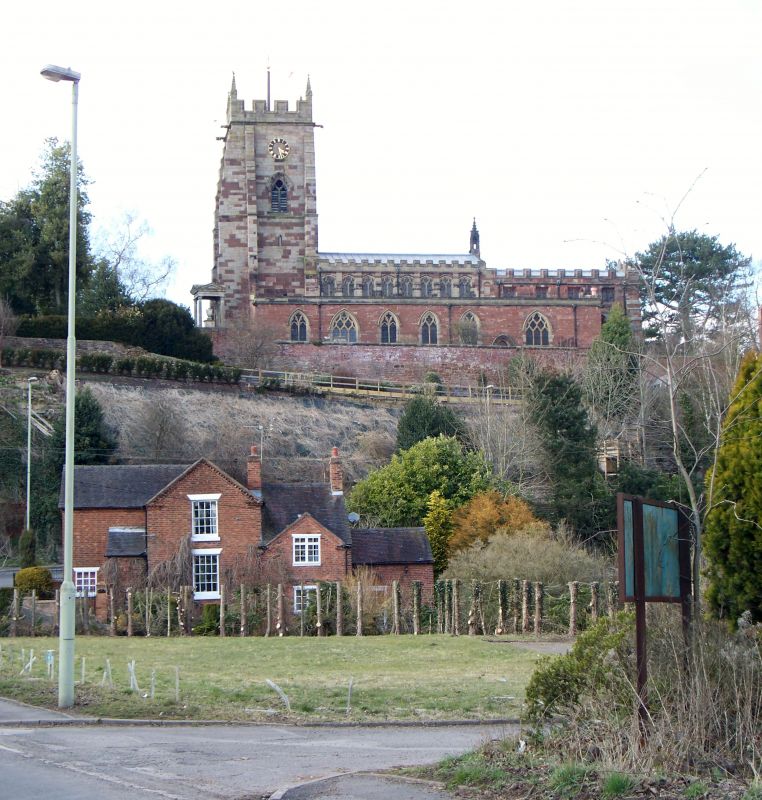 Stained glass: that in east window of 1895, in south aisle of 1901
and 1903 and in north aisle of 1904, all by Kempe. West window glass
by Shrigley and Hunt. Monuments: stone tablet in south aisle to William
Church (d. 16 June 1632) and his son Richard (d. 24 October 1651), with
flanking scrolls and segmental pediment with shield. Stone tablet
in chancel to Dame Anne Corbet (d. 24 October 1682), consisting of a
cartouche with swags, flanking putti, winged angel at base etc. Tablet
in south aisle to Sir John James Markham (d. 10 December 1778) signed
by Joseph Wilton, with mourning female figure to right and urn to left.
Tablet on tower pier to John Smallwood (d. 7 April 1771) and Catherine
his wife (d. 22 December 1765). Old photographs kept in the church
show the interior before restoration with galleries and box pews.
An engraving of c.1875 shows the exterior with the late C18 hipped-
roofed aisles. The C18 work commenced in 1786. There is a local
tradition that Robert Clive (1725-74), later to become Lord Clive of
India, climbed the church tower and sat astride a gargoyle when he was
attending the grammar school (q.v.) nearby.