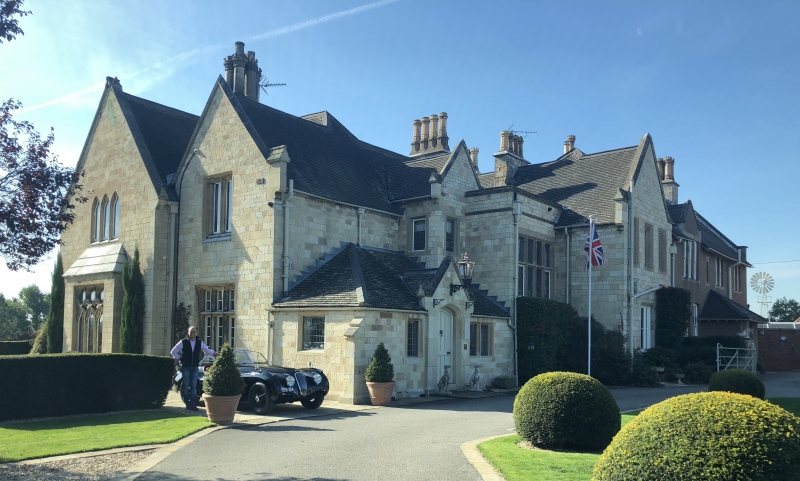 House. Early C19, c.1845, late C19 and C20. Ashlar, red brick
and render. Plain tile roofs with 7 various stacks. Ashlar
coped gables, some with kneelers. 2 storeys. South front with
10 irregular bays, some being gabled and some single storey. The
right 5 bays are ashlar, the remainder brick and render. Having
from right to left c.1845 2 bay wing, the right bay being single
storey, the left 2 storey and gabled. 2 arched windows, each
with 2 arched and cusped lights and 2 quatrefoils. In the
spandrel is a decorative cross set into a quatrefoil and circle.
The hood mould has decorative label stops. The 3 bays to the
left are early C19, 2 storey and set back. The left bay of this
wing is gabled. Having a doorway with glazing bar door and
traceried overlight, a single fixed light with lead glazing bars
and further left a large projecting single storey late C19 canted
bay with single 5 light cross casement with lead glazing bars and
single similar smaller casement in each side wall. The early C19
2 storey, single gabled bay to the left projects from the wing to
its right and has a single tripartite cross casement with lead
glazing bars, hood mould and label stops. The 4 single storey
C20 bays to the left slightly project and have a moulded parapet
with pilaster strip buttresses which terminate in the band
running below the parapet. Single cross casement with lead
glazing bars, to the left is a doorway with double glazing bar
door with brattishing over and depressed arch, hood mould and
label stops. Left of this is a single similar casement and
further left a single canted bay with 3 glazing bar casements
with lead glazing bars. Above from right to left, a single pair
of cusped and arched lights with single central decorative cross
set into a quatrefoil and circle, a single 2 light stone mullion
casement, a single 3 light stone mullion casement with lead
glazing bars and drip mould, a single 2 light stone mullion
casement with hood mould and label stops. East front. 2 storeys
with 2 gabled bays, the earlier right bay being slightly set
back, has a single tripartite glazing bar cross casement. To the
left is a single storey projecting bay window with 3 arched and
cusped lights with quatrefoils over. Above is a single 2 light
stone mullion casement with a single window with 3 arched and
cusped lights to the left. 11 bay irregular north/entrance
front has a single storey closed and gabled porch with chamfered
arched doorway and panelled door. To the right in a projecting
lean-to is a single small casement. Further right projecting
from a gabled wing is a lower 2 storey single bay with parapet
and single orb at the left angle and single small glazing bar
casement. To the right is a projecting and gabled bay with
single tripartite casement with glazing bars in the outer lights.
The remaining 7 bays to the right are rendered brick and have
glazing bar sashes, a doorway and a projecting single storey bay.
Above in the left gable is a single light with lead glazing bars.
To the right in the projecting bay is a large 4 light cross
casement. Further right are 3 small glazing bar sashes and in
the rendered bays are glazing bar sashes. Apart from those in
the rendered north front all openings have ashlar surrounds.