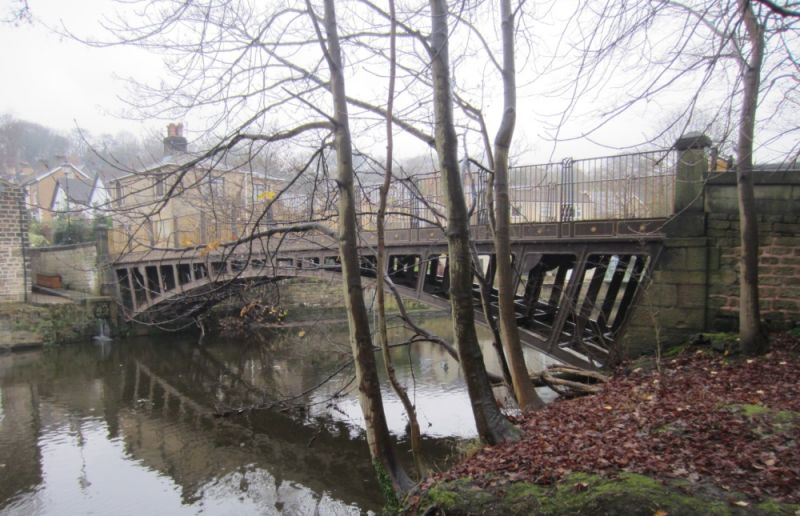 The asset was previously listed twice also under List entry 1240013, in the parish of Horsforth. This entry was removed from the List on 6th May 2015.

Public road bridge over River Aire. Dated 1819, restored
c1985. Cast and wrought-iron, with sandstone abutments.
Battered sandstone abutments each end; single segmental span
of 4 slender H-section ribs interconnected by regular
cast-iron lattice braces, stayed by wrought-iron rods to
slender joists supporting deck; a plaque at the keystone
position has raised lettering: 'JP/ AD1819'; low parapet of
panelled iron carrying railings. Sett-paved deck with tarmac
side pavements; protected on both sides by stick-baluster
railings in sections between openwork standards which have
diamond-latticed panels at the bottom and Y-tracery panels at
the top.
Attached to both inner sides of the standards in the centre is
an oval plaque with raised lettering: 'JOHN/ POLLARD/ NEWLEY
HOUSE/ ERECTED THIS/ BRIDGE/ A.D/ 1819..'; an oval plaque with
small lettering on the same casting: 'AYDON & ELWELL/ SHELF/
IRON WORKS/ NEAR BRADFORD/ YORKSHIRE'.
One of only 2 such bridges built by Aydon and Elwell surviving
in this county; the other is the Gasworks bridge at Sowerby
Bridge. One of the oldest iron bridges in Yorkshire, it was
erected in 1819 to connect Whitecote with the Leeds-Horsforth
turnpike. Pollard's scribbling mill and weaving shed stood on
the S side of the river, E side of Pollard Lane. The parapet
railings were replaced and the cobbles relaid in the 1980s.
(Thomas RCN: A Noble Scene of Industry: 33; Brears P: Museum
of Leeds Trail: 40).