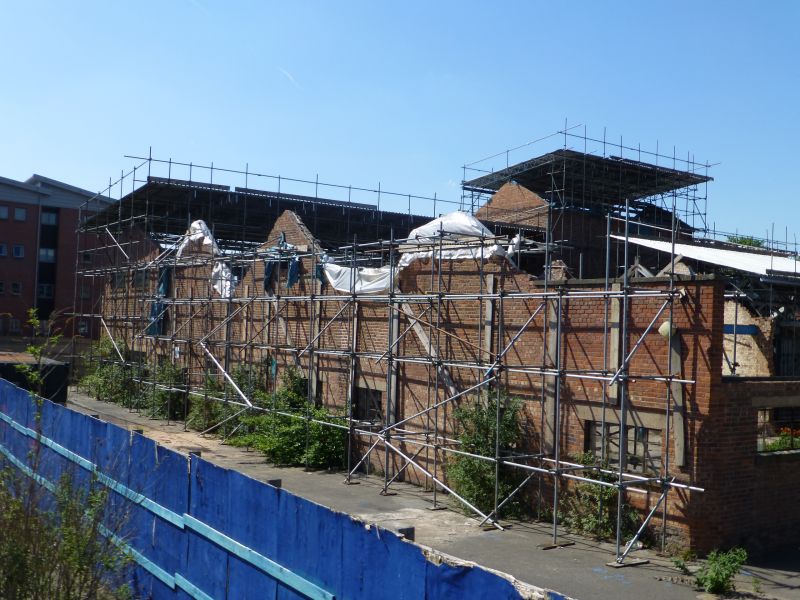 Leadworks and shot tower, the works now largely storage. 1799
and later. Brick; slate roofs.
EXTERIOR: industrial workshop formerly of 6 bays, now 3 bays
plus a higher west bay. The lower brickwork of south side to
Chester Canal altered C20, with doorway and 9 metal windows;
gable clock, 1801, face to canal. The partly-glazed roofs are
partly covered with sheet materials.
The shot tower, the principal feature which justifies the star
grading of this item, was built by Walkers Parker and Co. in
1799, primarily to provide lead shot for the Napoleonic wars
and the only British shot tower now to remain in use. It is
embraced by the workshops. Circular, 30 feet (9.1m) diameter
at base and 20 feet (6.0m) diameter at crown, it is 168 feet
(41.19m) high with an attached lightly clad steel-framed C20
lift-shaft.
INTERIOR: the shot-tower interior is intact with peripheral
stone spiral stair; 4 round-arched windows, rising with the
stair, to each turn.
HISTORICAL NOTE: the tower is important as evidence of the
revolutionary process of shot production patented by William
Watts in 1783.
(Associated Lead Manufacturers Trade Journal: Nichols DA:
Chester's Shot Tower: London: 1980-).