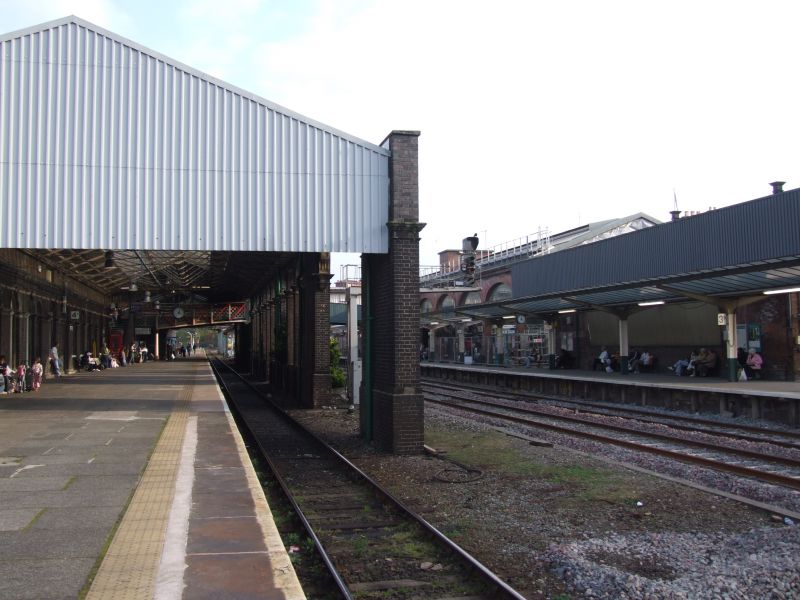 Railway station, offices and shop. 1847-8. By CH Wild and
Francis Thompson, with some involvement by Robert Stephenson;
the contractor Thomas Brassey. Stone-dressed pale brown brick;
slate and glazed roofs. Italianate style.
PLAN/EXTERIOR: 2 storeys to front; a long, symmetrical central
block with end pavilions plus a 10-window right wing, a
shorter left wing and the Mold Wing set forward with a
2-storey 6-window section then a 12-bay train-shed. The very
long overall facade is architecturally homogeneous, punctuated
with projecting pavilions. 4 cast-iron columns support glazed
entrance-canopy with trusses on ornate arched brackets. A
shallower canopy of 4 bays right and 3 bays left on
cantilevered wrought-iron brackets. A plastered groin-vaulted
loggia under the left pavilion; the right pavilion contains
offices. The ground-floor windows are round-arched with large
margin-paned sashes in moulded stone cases. Margined 12-pane
sashes to first floor have pedimented cases. The pavilions
have emphasised detail including balconies, and corner turrets
with paired round-arched openings. The central sashes are
tripartite. The wings are expressed similarly to the central
range; all have friezes and cornices.
The Mold wing, far left, expressed similarly to the other
facades, its 3-window right end facing the main station
forecourt and the long side of the offices plus the former
train-shed parallel with the main frontage. It has boldly
corniced chimneys.
INTERIOR: the entrance and former public rooms, including
refreshment room where in 1859 "the utmost wish of your soul"
could "be incontinently gratified" (T Hughes - The Stranger's
Guide) are stripped or covered. The concourse has round-arched
doorways and windows to former public rooms and offices and
brick basket arches and round arch to platforms; glazed roof.
A grand stone-dressed brick stair to each end of the iron
lattice-girdered footbridge linking near and far platforms.
Platforms 4 and 7 form an island between tracks with
accommodation in two pavilions, of 11 and 13 bays

respectively, of stone-dressed brick with doors and
margin-paned sashes in round-arched openings. The main canopy
has twin ridges running parallel with the tracks. The inner
edge is carried on a brick arcade running between the second
and third track of the main line. The valley between the
ridges is on 5 cast-iron columns between the pavilions. The
outer edge is on a lattice girder and stanchions. The north
bay platforms have a C20 canopy.
HISTORICAL NOTE: at first the station served several railway
companies and until closure of Chester Northgate Station c1969
was named Chester General.
(The Buildings of England: Pevsner N & Hubbard E: Cheshire:
Harmondsworth: 1971-: 159; Bartholomew City Guides: Harris B:
Edinburgh: 1979-: 166-7).