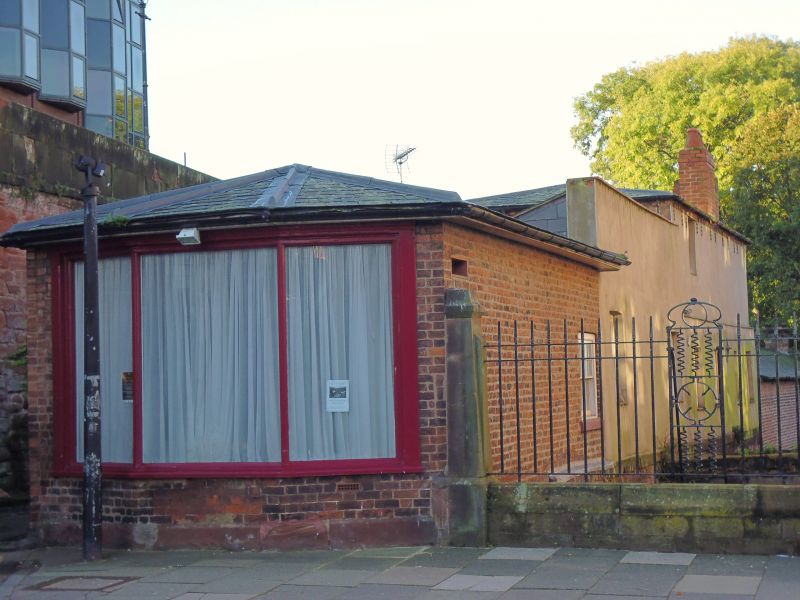 Toll cottage, house and workshop on site of former City gaol,
now house. c1800 with possibly earlier lower walling. Coursed
red sandstone, brick and render; hipped grey slate roofs.
EXTERIOR: partly one storey, partly 2 storeys, the 2-storey
block of 3 windows. The south face to the City wall has 2
doors, that to west of 6 panels, that to east of 4 fielded
panels; two C20 inserted windows between doors; square bay
west of west door. The single-storey east wing, of 2 dates,
has a 16-pane flush sash and a projecting gabled porch with 2
stone steps to 5-panel door with 2-pane sidelights and 3-pane
overlight. The first floor of the main block has 3 recessed
16-pane sashes with painted stone sills and simple lintels.
The long workshop wing, west, is partly stone-walled. The
lower, outer portion of the east wing appears to have been a
toll-cottage; its east end to Upper Northgate Street has an
almost full-width canted bay window with replaced large panes.
2 chimneys north of main block ridge; 2 blocked chimneys on
ridge of east wing. The north face to the canal has lower
walling of stone, an unequal 12-pane flush sash to lodge, a
6-pane sash and 4 replaced windows to main block. Stone plinth
with stringcourse, 5 windows with vertical bars and a stone
west gable chimney to workshop.
INTERIOR not inspected.