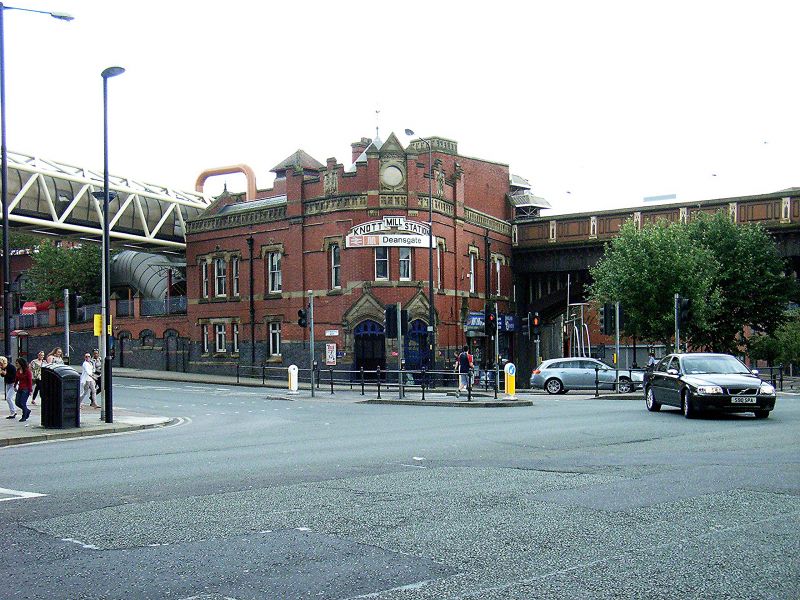 Railway station. Dated 1896. Built of red brick with blue brick bands and stone and terracotta dressings, slate roof almost entirely hidden from the street. On a very angular site with the entrance at the sharply curved corner. Two stories in a Baronial style. Paired entrances on the corner with terracotta surround, pointed arch doorways with mock portcullises, gabled heads on colonettes, paired between the doors. Blue brick base with stone banding, band at first floor cill level, machicolated band at eaves level, parapet stepped up and down as mock battlements. Shield with date 1896 and stone scroll carved with the original name KNOTT MILL STATION. The first floor has a paired window over the doors and single ones on either side, all 1-over-1 plate-glass sashes with carved stone heads. A turret pilaster frames this central feature on either side. The left return has a single and a tripartite cross-framed casement below and similar 2-over-2 sashes above. The right return has two original framed shopfronts with later windows, and sashes above as before.

INTERIOR: Opened as Knott Mill in 1849 on the Manchester South Junction and Altrincham Railway. The line was owned jointly by the London and North Western Railway and the Manchester, Sheffield and Lincolnshire Railway from the start of operations. This was one of the first truly suburban railways and was instrumental in the development of its hinterland. It was rebuilt at street level in 1896 by Robert Neill and Son at the cost of £2,000. The line was electrified in 1931 and the station was renamed Deansgate in 1974. Reference: Gordon Biddle, Victorian Stations, 1978, p.198.