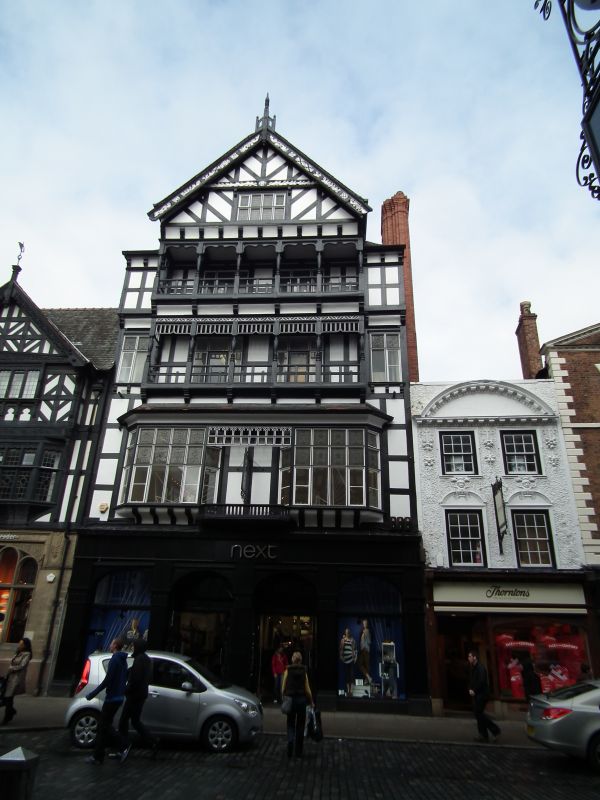 Shop and accommodation. Rebuilt 1892 by Charles A Ewing for
Messrs Dickson. Timber frame with plaster panels to front,
brick to rear, grey slate roof.
EXTERIOR: 4 storeys plus attics; symmetrical. Modern shopfront
of 4 basket-arched openings, 2 with glazed double doors and 2
with simple transomed windows. The second storey has a balcony
between 2 canted 6-light oriels above coved aprons, with
mullions and 2 transoms and patterned leaded glazing between
transoms and head; hipped tiled roof above balcony and oriels,
the balcony having high-level open framing with trefoil heads
under the eaves; small framing between and beside the oriels.
The third storey has a 5-bay central balcony with vase-moulded
posts and flat ogee beams carrying high-level open framing;
two 3-light French windows to balcony; a cross-window to each
side with patterned leaded glazing above transom. A 5-bay
cove-jettied balcony to the fourth storey, expressed as to the
third storey, with a small-framed blank jettied wing to each
side. The jettied front gable has panelled herringbone
strutting and a 4-light mullioned and transomed leaded
casement beneath a further jetty-beam carved with cartouche
and foliage; carved bargeboards; elaborate pinnacled finial;
brick chimney on each gable-end. Vigorous and very free in
expression.
INTERIOR: the lower 2 storeys are recast; upper storeys not
inspected.
(Improvement Committee Minutes: Chester City Council:
15/6/1892).