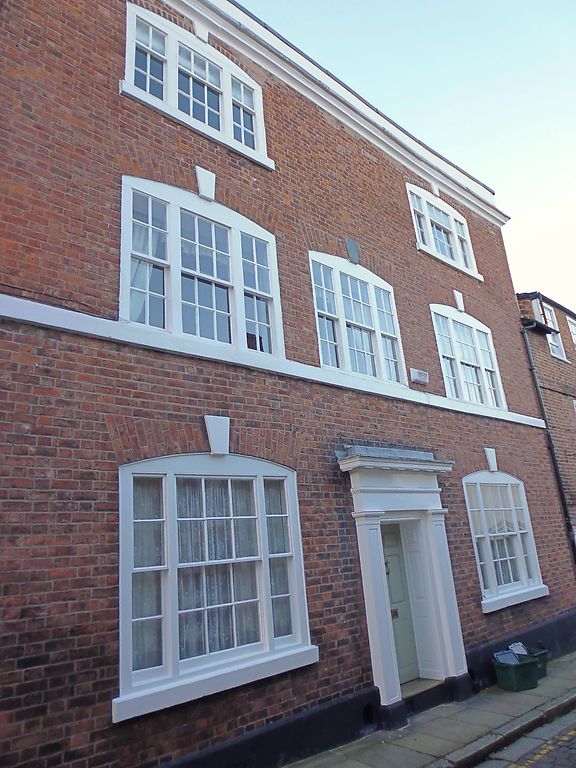 Town house. Early C18; front refurbished c1800; restored for
John Broom 1969-72 with some internal alterations. Brown
brick, in Flemish bond to front; grey slate roof has ridge
parallel with street.
EXTERIOR: cellar and 3 storeys; double-fronted, symmetrical.
Rendered stone plinth has cellar vents; door of 4 fielded
panels above 2 flush panels in panelled doorcase with
pilasters having incised front panels and an entablature;
windows are tripartite flush sashes of 4;12;4 panes with
painted stone sills and gauged brick heads with keystones, 2
to the first storey, 3 to the second storey which has a
floor-band and 2 to the third storey; moulded cornice beneath
rendered parapet; parapet gables with 2 rendered chimneys on
each.
The rear has a lean-to roofed outshut of 2 storeys with a
round-arched small-paned window to the first storey and a pair
of 2-pane sashes under a cambered head to the second storey;
east of the outshut a flush 12-pane sash to the first and
second storey and a 16-pane window to the third storey; west
of the outshut an inserted 2-pane window beneath a nearly
flush stair window of 40 panes, the outer panes being
narrower, an 8-pane radial-bar fan in the round brick arch;
west of the stair a tripartite casement of 10;10;10 panes to
the first storey, a 12-pane flush sash to the second storey
and a 16-pane metal casement to the third storey. A one-storey
rear wing, east, has no visible features of interest.
INTERIOR: the cellars have front wall and base of back, east
and spine walls of rubble sandstone, partly coursed, and other
walling of brick, indication of a former direct access from
the street, 2 brick barrel vaults; sandstone steps. The hall
has HL hinges to the front door; the inner door removed from
opening with radial-bar fanlight. The east front room has door
of 6 fielded panels, a probably early C19 marble fireplace,
sub-panels and panelled shutters to windows, almost full-width
inserted opening to west back room, cornice; the back room has
door of 6 fielded panels, sub-panels and panelled shutters to
window, cornice and 2 facing cupboards, that to east having
lower cupboard with double doors of one fielded panel
surmounted by round-arched alcove with fluted pilasters and
shelves; that to west has lower cupboard removed. The west

front room has a probably rebuilt rear wall, sub-panels and
panelled shutters to window, frieze rail and cornice and a
probably replaced door of 6 fielded panels to the back room
now the kitchen, which has a door of 6 fielded panels from the
hall and a chamfered softwood cross-beam.
The good open-well open-string stair has carved foliate
brackets, curtail, turned newels, 3 plinthed turned balusters
per step, swept softwood rail and swept dado on pilasters. The
east front room, with some carefully executed alterations,
1969-72, has door from landing and, repositioned, door from
west front room of 6-fielded panels in cases with good
entablatures having consoles, flutes and urns in relief;
skirtings, panelled embrasures, plaster wall-panels, some
modified, inserted opening to east rear room with Ionic
pilasters and modillion cornice. The west front and rear rooms
are relined.
The stair to the third storey is largely detailed as that to
the second storey, but for the rebuilt third flight which has
shaped brackets and stick balusters; doors of 4 fielded panels
on HL hinges.