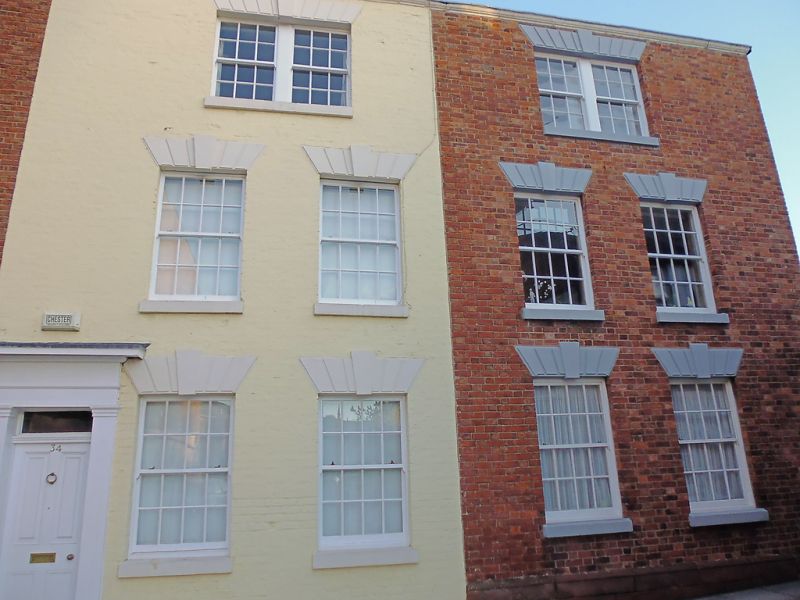 Pair of town houses. Early to mid C18 with fronts refurbished
c1840. Brown brick in Flemish bond to the front, but with
No.34 rendered C20; two roofs, of grey slate to No.32 and red
clay tiles to No.34.
EXTERIOR: sandstone plinth with moulded cap. The door to No.32
is in the east end, of 6 fielded panels in case with plain
pilasters and Doric pediment. Door to No.34 at west end of
front has door of 4 fielded panels in case with pilasters and
entablature. Recessed sashes have painted stone sills and
rusticated wedge lintels with keystones, four 16-pane sashes
to each of the first and second storey and 2 pairs of 12-pane
sashes to the third storey; cornice.
The rear has 2 gables; added flat-roofed 1-storey extension to
both houses; other features renewed, each house has a 12-pane
flush horned sash to the first and second storeys, an inserted
door from the second storey to the flat roof and a pair of
12-pane sashes to the third storey.
INTERIORS; No.32 has a brick barrel-vault to the rear part of
C18 cellars, with sandstone rubble walling below the springing
of the vault; stone steps. Door of 4 fielded panels to first
storey front room, stripped of other features; the back room
has door of 4 fielded panels and inglenook with re-used or
altered oak bressumer on sandstone pad to rear end. Softwood
stair with narrow well has open string with shaped brackets,
turned newels, 3 plinthed turned balusters per step, swept
rail and panelled swept dado with panelled pilasters. The
second storey has 2 doors of 6 margined panels in cases with
broad moulded architraves. The stair to the third storey is
detailed as the lower stair; the third storey has 3 doors of 2
fielded panels.
The interior of No.34 could not be inspected.