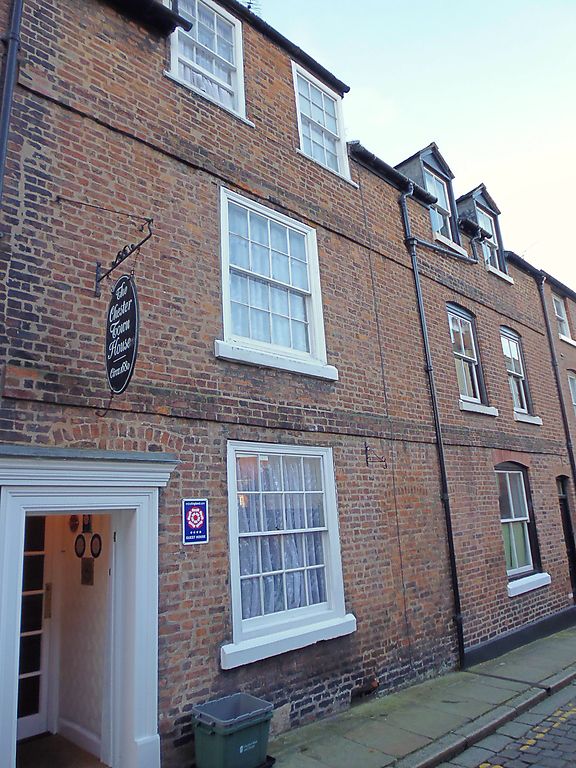 2 small town houses. Late C17 or early C18, altered. Brown
brick in irregular bond; grey slate roof has ridge parallel
with street.
EXTERIOR: cellars, 2 storeys and attics. Flush sandstone
plinth to No.25; plain 3-course second storey floor band. The
original central pair of doorways, with cambered heads, are
bricked up and replaced by an entrance at each end of the
front with a door of 4 fielded panels above 2 flush panels in
a replaced doorcase with cornice to No.23 and a replaced door
of 4 fielded panels with a plain overlight under a cambered
head to No.25. Flush and nearly flush sashes with painted
stone sills: one of 16 panes to the first and second storeys
and 2 of 12 panes to the attic storey of No.23; 4-pane sashes
to No.25, one to the first storey, 2 to the second storey and
2 in gabled half-dormers to the third storey. Ridge chimneys
between the houses and on the west gable of No.25.
Rear: No.23 has a small lean-to roofed outshut and 4-pane
flush sashes. No.25 has one recessed 4-pane sash with stone
sill and cambered brick head to first and second storeys and a
4-pane half-dormer to the third storey, with a rear wing,
west, which has no features of special interest.
INTERIORS: No.23 has a brick cellar with stone steps. The
narrow hall has some squared rubble sandstone in the party
wall with No.21 (qv), a 4-board cellar door; other doors are
replaced. The front room has an oak inglenook bressumer
against the west wall; the back room has a corner chimney
breast. The stair has a closed string, square newel and 2 vase
balusters per step; the partition between landing and rear
bedroom is oak-framed; 5-panel door to front bedroom which has
a chamfered oak beam; the back room has a corner chimney
breast; oak lintel over opening to rear wing which has no
visible features of interest; stair to attic storey similar to
that below.
No.25 has brick cellar beneath the rear room, with stone
steps. The narrow hall has a door of 4 broad boards to the
cellar, a replaced door of 4 fielded panels to the front room
which has a chamfered oak bressumer to the inglenook
back-to-back with that of No.23, the probably inserted base in
the ceiling to a corner fireplace above; and exposed joists; a
2-panel door to the back room which has a corner fireplace and

exposed joists; a door to the rear is of 4 broad boards to the
hall and framed in 2 fielded panels, probably of oak, to the
yard. The stair has closed string, square newel and 2 vase
balusters per step. The second storey rooms have broad-board
floors; the front room has a chamfered oak cross-beam and a
corner fireplace; replaced 4-panel doors. The stair to the
third storey is similar to that below; the front and back
rooms have doors of 4 broad boards on gudgeon hinges, corner
fireplaces and oak purlins, that to the front room chamfered.
The interiors suggest the later C18 replanning of baffle-entry
houses, probably late C17.