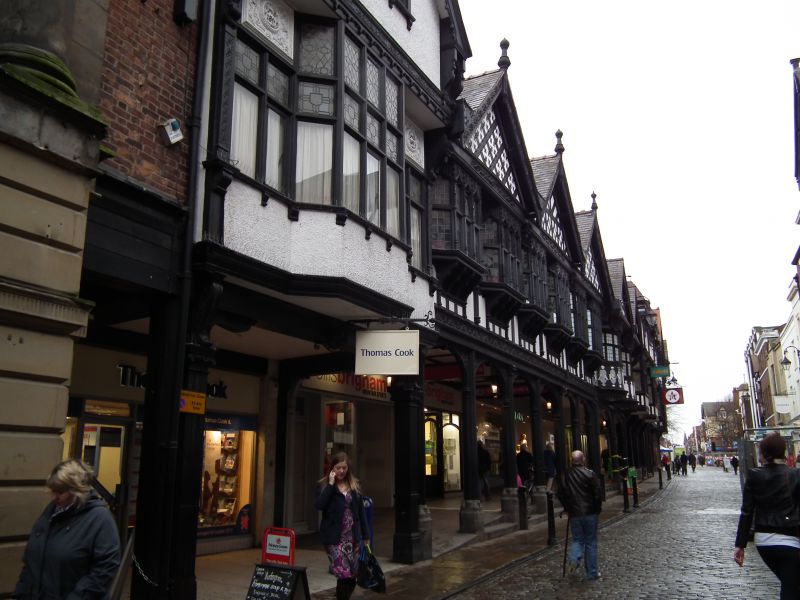 3 shops with accommodation, now 2 shops and part of a larger
shop. 1900. By John Douglas as architect and owner. With Nos
11-31 (odd) (qv) they form an enterprising and assured Neo
Vernacular range which includes shops by H Beswick and J
Strong. No.9 was partly rebuilt after fire damage in 1914.
Timber frame with plaster panels; slate roofs with gables to
street.
EXTERIOR: 2 storeys in vivacious late C16 manner. Arcade of 6
bays, raised 2 steps above street pavement, has moulded timber
posts on shaped sandstone plinths and 3-centred timber arches
with richly-carved spandrels and keys; modern shopfronts of no
interest; bressumer carved with running pattern is dated 1900.
The second storey has shaped plaster panels beneath 2 canted
oriels of 5 lights to each shop, with shaped mullions and
moulded transoms, each on 4 brackets divided by carved panels;
leaded glazing with shaped panes; ogee heads to lights
surmounted by richly-carved panels. a niche between the two
oriels of each shop contains a carved figure: Justitia on
No.5, St Crispin on No.7 and unidentified on No.9. Carved
bressumers on shaped brackets carry the 3 jettied gables which
have shaped panels, carved bargeboards and ornate finials,
that to No.9 damaged. The rears are concealed.
INTERIORS: Nos 5 & 7 have cellars with no features of interest
in succession to former undercrofts; No.9 has brickwork of a
partly medieval undercroft.
Nos 5-31 (odd) are collectively known as `Saddler's Row' and
were previously listed as Row numbers.
(Improvement Committee Minutes: Chester City Council: MB 1899;
Chester Rows Research Project: Harris R: Northgate Street:
1989-).