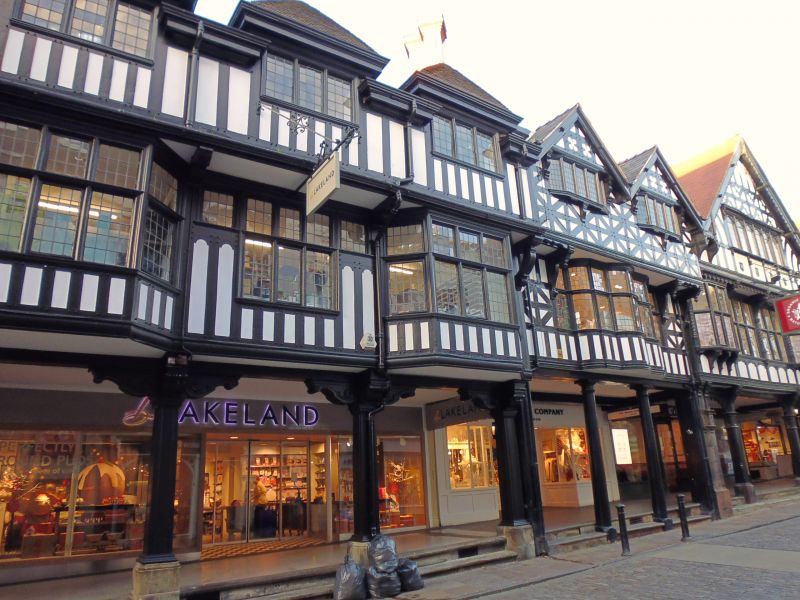 Pair of undercrofts, now joined, and shop. The undercrofts are
medieval, the shop c1909 by James Strong. Some concealed metal
framing, timber frame with plaster panels, clay tile roof.
EXTERIOR: 3 storeys. The Row arcade 2 steps above pavement
level has 4 stanchions in painted timber hollow posts with
Classical mouldings at heads and feet on yellow ashlar
plinths, carrying a bressumer to the jettied second storey on
moulded timber brackets to front and sides. The second storey
of 3 bays has close studding beneath continuous leaded glazing
with a 5-light oriel with moulded mullions and transom
occupying each side bay and a 3-light mullioned and transomed
casement, with fixed light to each side above transom level,
in the middle bay. The third storey is jettied, with close
studding and 3 hipped half-dormers of 3 lights with moulded
mullions; rainwater heads with cornices; a red brick chimney
with stone plinth and 2 diagonal flues with corbelled brick
caps at each end of ridge. The brick-built rear has no
features of special interest.
INTERIOR: the short undercrofts were probably the paired
undercroft of one medieval house; remains of stair from
undercrofts of No.17 to Row of No.15; an earlier pit, probably
Roman, by north wall of No.17. The Row storey has no visible
features of interest. The second storey has plaster cornice in
front room and the broad openwork arches of 2 former arcades
from which the posts have been removed. The third storey has
no visible features of special interest.
No.17 is on the site of the former Cross Keys Inn.
Nos 5-31 (odd) are collectively known as `Saddler's Row' and
were previously listed as Row numbers.
(Chester Rows Research Project: Harris R: Northgate Street:
1989-).