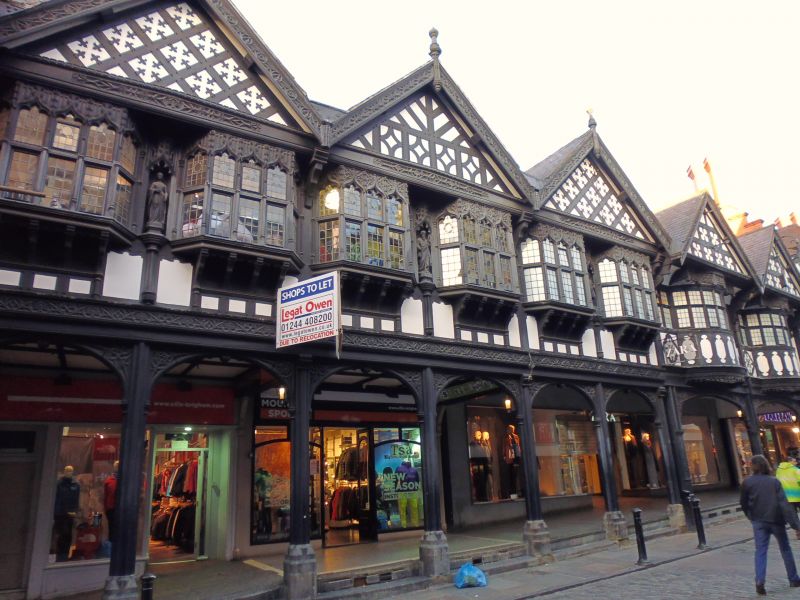 A store of 2 bays. Medieval undercrofts with structure above
dated 1900. By John Douglas, of Douglas and Minshull. For JF
Denson and Sons, with some later alterations. Cast-iron,
timber framing with plaster panels, grey-green slate roof.
EXTERIOR: undercroft and 2 storeys with rear wing partly of 3
storeys plus cellar and attic. The Row, 2 steps above pavement
level and probably below the medieval Row level, has a 2-bay
arcade of hollow posts, with fronts carved in late C16 manner,
concealing cast-iron or steel columns on red sandstone bases
which carry non-structural richly-carved segmental arches of
painted timber on carved brackets; the fascia to the bressumer
has a carved cornice. The second storey has full-width leaded
glazing above a row of shaped timber-framed panels; the
glazing to each bay has a 7-light bowed oriel flanked by
paired lights right and left, all with moulded mullions and
transom; richly-carved open-work skirts beneath oriels and
beneath the 2 jettied gables at their heads; consoles support
the gable-feet; each gable has 2 rows of ornate quatrefoil
panels; carved bargeboards. The taller rear wing has a single
slate-hung gable.
The rear is brick with plain slightly recessed wooden
casements.
INTERIOR: sandstone medieval undercrofts with a rectangular
pier central on No.11 and a former access either to the rear
or an upper storey; the first storey has moulded cast-iron
columns; the second storey is an open sales floor with a
full-width panelled plaster barrel-vault and rooflights in
canted rectangular wells.
Nos 5-31 (odd) are collectively known as `Saddler's Row' and
were previously listed as Row numbers.
(Chester Rows Research Project: Harris R: Northgate Street:
1989-).