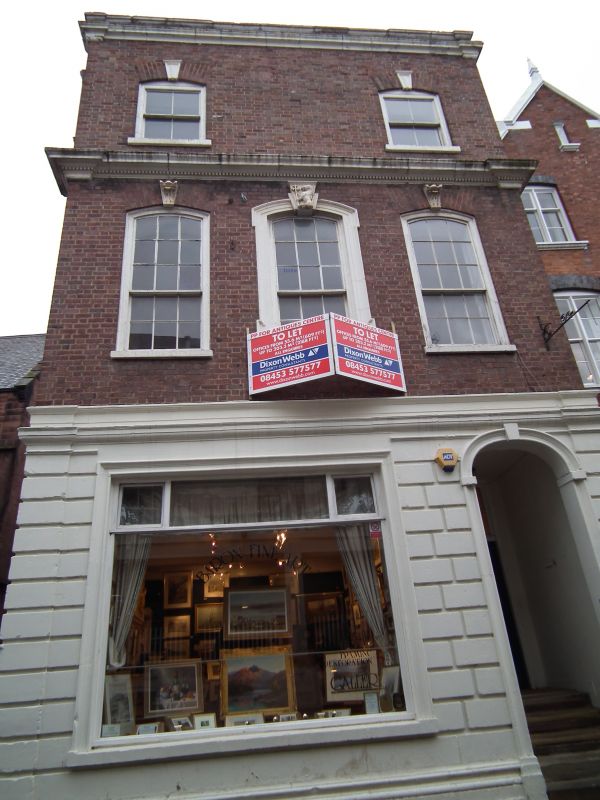 Town house, now shop and offices. 1729 for Alderman Henry
Bennett, altered probably later C18 and front rebuilt
retaining original features mid C20. Painted stone,
stone-dressed brown brick; grey slate roof of 4 narrow spans
with ridges parallel with Watergate Street.
EXTERIOR: 3 storeys plus cellars. The front to the lowest
storey, added late C18 or early C19 is of rusticated stone
with moulded plinth, recessed porch to right in moulded
basket-arched case with five steps to house (now office) door
of 6 fielded panels and shop door, left; shop window with
moulded stone surround; cornice. The rebuilt brick front above
incorporates three 15-pane flush sashes to the second storey,
that at centre in shouldered and eared architrave with a lion
bearing a Cross of Lorraine on the face of a raised triple
keystone; the sash to each side has a painted stone sill and
an acanthus keystone. A substantial cornice at the base of the
attic storey is returned at each end; two 4-pane sashes under
cambered heads with moulded keystones; the upper cornice
carries a low parapet with moulded coping.
The west side to Trinity Street is of old brown brick. The
first storey has a recessed porch with a half-glazed 4-panel
door, a small 9-pane flush sash and 2 replaced tripartite
sashes under cambered heads. 3-course brick floor-level bands
to the second and third storeys. In the second storey the
Venetian stair-window of 4;16;4 panes replaces the blocked
openings of a pair of sashes with a pair of circular windows
above; there is a small inserted second storey window and a
24-pane flush sash. The upper band is carried over the blocked
circular openings. The third storey has a 4-pane sash in a
rebuilt opening with cambered head and moulded keystone, and
three 12-pane flush sashes; each window is under the gable of
one of the four ridges; 3 lateral chimneys, the rearmost being
large; a narrow 2-storey rear wing. The rear has 2 visible
16-pane sashes to the second storey and a 16-pane sash and a
12-pane sash to the third storey.
INTERIOR: the cellars, in the manner of undercrofts, are
ceiled with a pair of long, parallel brick barrel-vaults. The

front chamber at former Row level, now a shop, has a C18
fireplace in its west wall, a former screen of 2 Tuscan
columns against its rear wall and a cornice. The stair hall
has a basket-arched doorway to the entrance-lobby and to the
rear east room which has a panelled dado and a cornice; the
rear east room and the front west room (the shop) have doors
of 8 fielded panels, the rear west room a door of 6 fielded
panels; the lobby door is renewed. The oak open-well stair
against the west wall is probably mid C18, with open string
displaying shallow overlapping steps, curtail steps, a heavy
swept rail on 3 barleysugar-on-vase balusters and a panelled
dado; a panelled embrasure to the stair window. The probably
original but now secondary stair is diagonally north-east of
the main stair, with open well, dado panelling to second
storey, dado rail to third storey and probably repaired turned
balusters. The second storey has a basket-arched doorway to
the rear east room, which also has a basket-arched recess,
doors of 8 fielded panels and embrasures with 2 panels under
windows. The third storey has doors of 2 and 4 fielded panels
and corner chimney-breast.
(Chester Rows Research Project: Brown AN & Grenville JC &
Turner RC: Watergate Street: Chester: 1988-: 33; Bartholomew
City Guides: Harris B: Chester: Edinburgh: 1979-: 104).