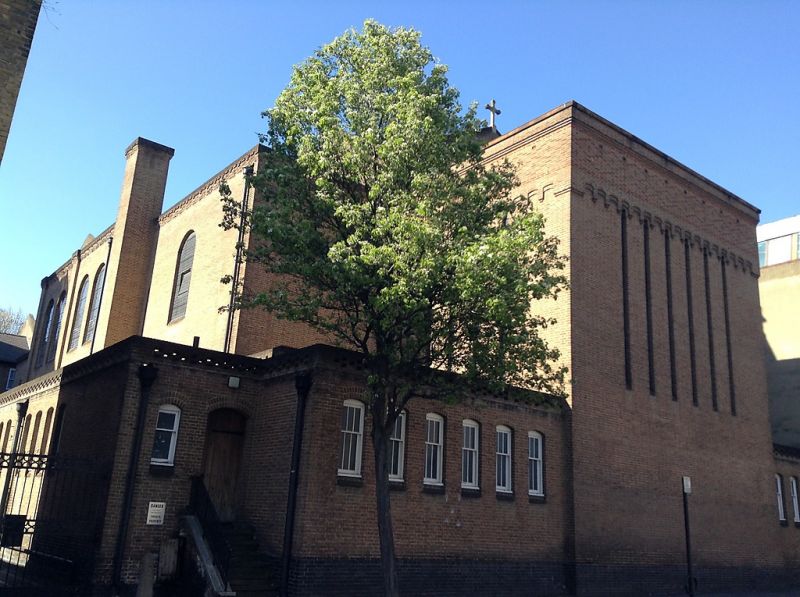 Entry Name: Roman Catholic Church of Our Lady of the Rosary and Attached Presbytery

R.C. Church and presbytery. 1959-62. Designed by H.S. Goodhart-Rendel and completed after his death by DA Rud & H Lewis Curtis. Brown brick with red and brown diapering to tower. Low pitched slate roofs falling to eaves. Traditional plan with original altar against east wall in narrow sanctuary, dwarf transepts and passage aisles to nave. Presbytery attached to liturgical south-west. Liturgical west facade dominated by rectangular three stage tower with low saddle roof parallel to the road and blind lower flanking walls, separated by two-storey buttresses. Triple blind arches above entrance which is square-headed and has beneath segmental glazed arch which runs across all three arches. Single round headed window above in rectangulr decorated surrounds. Bell stage with six segmental headed louvres separated by buttresses. Presbytery (by Reid) neo-Georgian, of three storeys, nine main bays with the centre one with two windows, one above the other including a tall window, evidently lighting a staircase. These windows are segmental headed, as are two ground floor windows and two entrance doorways. Other windows square-headed. All are Georgian-style timber sashes with vertical glazing bars.
Interior of church of concrete plastered and painted. Additional altar set in forward position within the raised sanctuary, and original altar against the wall behind. Pointed barrel roof to sanctuary, and very narrow pointed lancet windows, six to east end and five to the flanks. Lower walls lined with green and blue tiles with white pattern, and upper walls stencilled in pastel green. Bold transverse arches across the nave, pointed and without capitals, and culminating in triple segmental headed arches above the main arches, at clerestorey level. Segmental headed clerestorey windows. The feet of the transverse arches are punctured for segmental headed passage aisles. The clerestorey is supported on transverse pointed barrel vaults at high level. To liturgical south side a gallery runs below this. Octagonal stone pulpit attached to north west pier of transept. Black marble altar rail. Blue, white and gold decorative tester suspended at high level above the altar. Simple timber benches. Decorative pendant lights hang from flanks of transverse arches and six-pointed metal chandelier hangs in crossing.
A grand church which displays Goodhart-Rendel's manipulation of spaces and planes to great effect. His last work and one of his best.