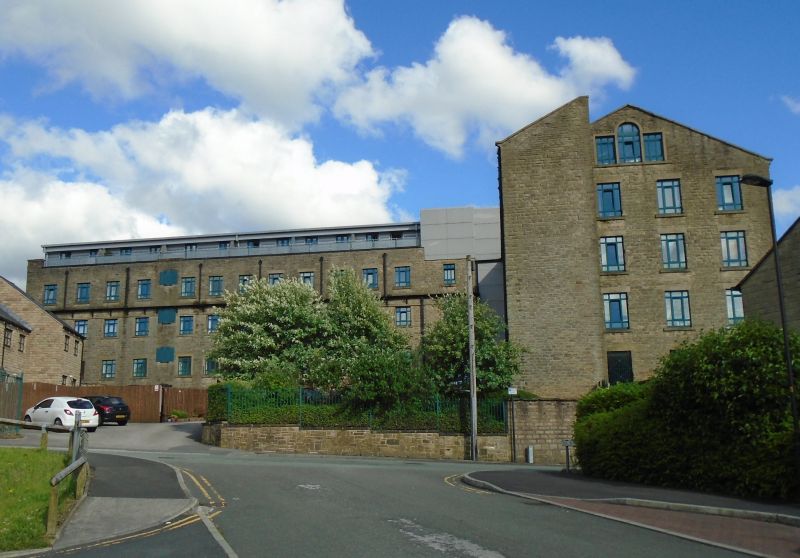 Integrated cotton spinning and weaving mill. Built in several phases between 1800 and 1823, though extended and perhaps partially rebuilt c1830-40. Roughly squared uncoursed rubble stone with slate roofs.
PLAN: complex comprises two 3-storeyed ranges at right-angles to each other, with a range of weaving sheds forming the third and fourth sides of a courtyard. Power transmission system does not survive.
EXTERIOR: eastern block, built in at least 2 phases, and now 3-storeyed, 12-window range with 4 bays return in gable, roofed with 6 transverse ridges. Stone string course over first floor windows. Parapet. Loading doors in return walls, and in centre of rear elevation to courtyard, partially blocked, but with cast-iron reinforcements to jambs.
Original build probably the 6 bays to the north, originally 2 storeys, raised in height when the middle range was added, linking this building to the southern range at right angles to it. Present loading bay to left of middle range, at angle with southern range, possibly an original feature, though altered and enlarged.
Southern range is also 3-storeyed, 11 bays with 4-window returns and with Palladian windows in gable apexes. It has itself been extended to the north-west by a block which houses a round-arched entrance doorway.
Large block of detached weaving sheds to west of site, comprising 8 long ranges, each with saw-tooth roof ridge, welsh slate and partially glazed. -., HISTORY: weaving was carried out on the site by 1823, although . it seems unlikely that the present sheds date from before c1840. Earliest factory on the site was built in 1800 by James Dyson, extended soon after by the so-called 'middle' and 'new' factories. Although the old mill was said to have been burnt down in 1825, it seems likely that the small building which comprises the northern part of the eastern range is what remains of this original building, with the new and middle mills adjoining it to the south.
Although the mill does not survive complete, as there is no visible engine house or other elements of power transmission, it is a good example of an integrated mill planned around a courtyard and with multi-phase construction reflecting rapid expansion of the business.