A Grade I Listed Building in Newbourne, Suffolk 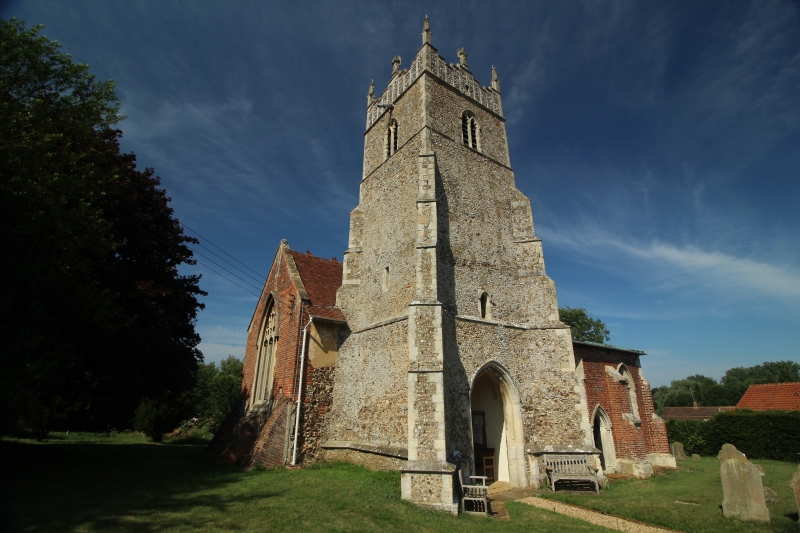 Parish Church. Nave and chancel C12, restored late C13 - early C14 when south
aisle and south tower added; further restored C19. The greater part of the
nave, chancel and tower are in rubble mixture of flint and septaria; the south
aisle was encased in early C16 brick and the west wall of nave rebuilt in red
brick c.1810. Plain tile roofs with decorative ridge tiles to nave and
chancel; lead roof to south aisle. Some vestiges of Norman stone-work in north
wall of nave. The 3 stage south tower has diagonal stepped buttresses with
stone quoins and C15 castellated parapet embellished with C19 crocketted
pinnacles and angels. The base of the tower serves as the south entrance
porch; the second stage has loop openings with stone jambs on 3 sides and the
bell chamber two-light openings with pointed arches and Y tracery on all four
sides. The nave, chancel and aisle have a mixture of windows, mainly early C14
with one C15 perpendicular window to south aisle. The south doorway has
pointed arch with a carved graffito of a mediaeval ship low on the jamb. In
the north wall of the chancel there is a tudor brick priest's doorway with
grille in door supposedly used by lepers. The interior of the nave has a
single hammer beam roof with carved spandrel supports. In the north wall of
nave is the C15 rood loft stair with upper and lower entrances. The framework
of the base of the screen with carved panels remains. The chancel has an
arched braced collar roof with some reused mediaeval timber. The roof to the
south aisle is original of simple rafter construction. Restored east window in
chancel retains C12 circular shafts. There is an early C13 lancet window in
south wall of chancel which has been divided to form a low 'side window' for an
external bell. Between south aisle and chancel there is a simple perpendicular
arch. In the south wall of the sanctuary is a trefoil headed piscina and a
double sedilia. Piscina and sedilium also in south wall of aisle. The
original octagonal stone font was restored and recut in the early C19; the
panels of the bowl symbolise the Evangelists alternating with angels; the bowl
is supported by angels from the stem on which there are lions alternating with
wild men. The altar is a Stuart Holy Table. Some C15 returned stalls in
chancel with poppy heads and traceried panelling to ends. The tower contains
one bell originally cast by Miles Graye in 1621 and recast in 1885 by C. Carr.