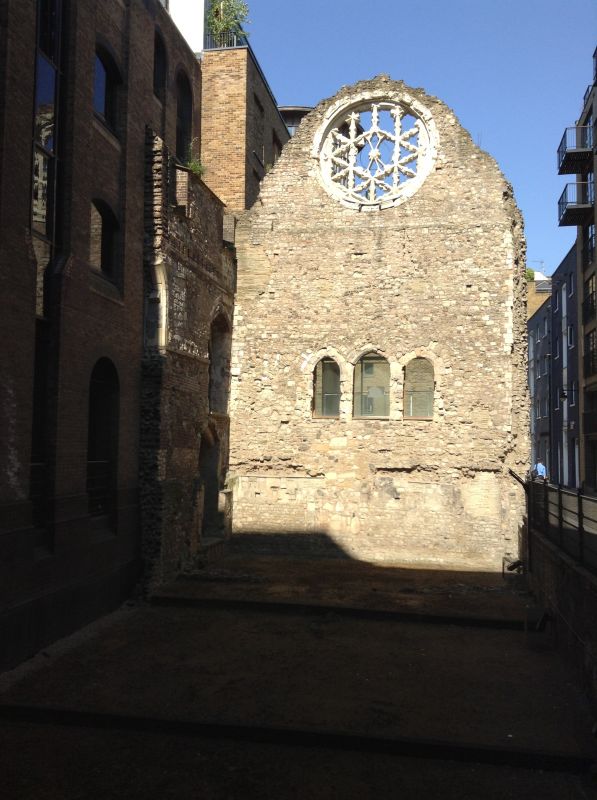 Great hall of Bishop of Winchester's palace (remains), now
incorporated in warehouses. Early C14. Walls of mainly
original early C14 stonework (on earlier foundations) consist
of high west wall with part of return wall south, with
excavations on a rectangular plan exposed to east.
Between 3rd- and 4th-floor levels of west wall, remains of C14
rose window (restored 1972) with inserted hexagon of 18 cusped
triangles. Beneath, on 1st floor, 3 arched openings with
traces of jambs. At basement level on east side of west wall
are stone vault springers.
On south wall, between ground and 1st floor, a C14
pointed-arched doorway with moulded arch and jambs, attached
shafts and caps, with remains of arched opening below.
INTERIOR: not inspected.
HISTORICAL NOTE: this was the town residence of the Bishops of
Winchester from the C12 to the Civil War, when it was used as
a civil prison. By the C18 warehouses had been established
over most of the site, forming the main character of the Clink
area. The medieval ruin is a Scheduled Ancient Monument.