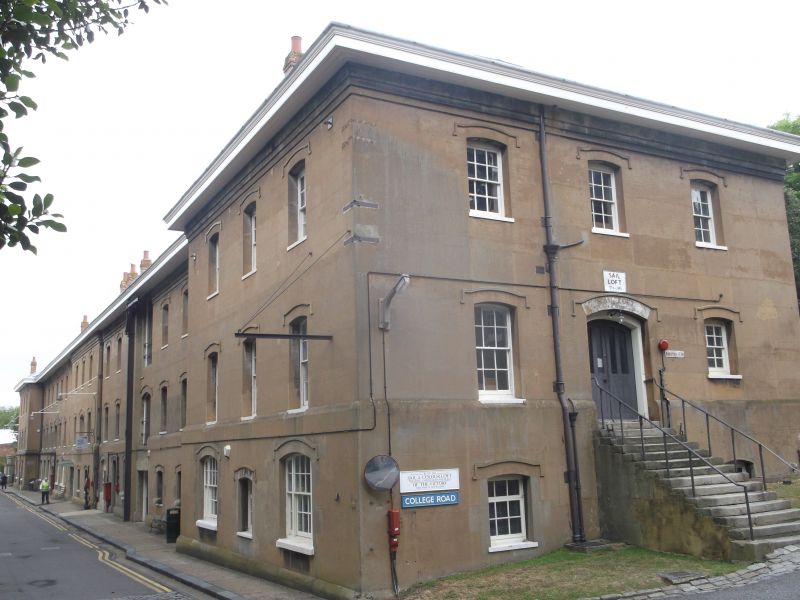 Sail loft. c1723, rendered C19. Rendered brick with lateral stacks and a hipped shallow mansard roof with slates. PLAN: rectangular plan with S stair and offices.
EXTERIOR: 3 storeys and attic; 19-bay range. A long symmetrical range has projecting end and central 3-bay sections, and a stepped frieze to overhanging eaves. Windows have segmental-arched heads and arched label moulds to 616-pane sashes some with thick early C18 glazing bars, with wider ones to the lower floor of the ends and to the middle of the 3 intervening sections with tripartite sashes. Matching rear elevation. 3-window S end has steps up to a central first floor segmental-arched doorway with half-glazed double doors, and windows as the front.
INTERIOR: former ships timbers from a C17 ship provide posts on the ground-floor, evidence of the Navy Board's instructions to "make use of old timbers from ships being took down". The first floor has C19 Y-shaped side braces added to the main floor beams which are cogged re-used timbers, the open second floor is reinforced with timber posts carried up the sides to the roof, which has early C18 queen post collar trusses, and sections of ridge lantern. S end has offices with flush 4-panel doors either side of a wide central axial stair from the end doorway, a settle on the second-floor landing and a lateral stair to the attic.
HISTORY: planned (but not completed) as a courtyard with rear wings, and crenellated parapet in the manner of the Officer's Terrace (qv). Used for making sails on the open top floor, and storing sails and flags below, for which the internal frame was an early example of an uninterrupted work space. The oldest surviving sail loft in a Royal dockyard, and a rare survival of a little-altered industrial building of this date.
With the nearby Officers' Terrace and Commissioner's House (qqv), part of the early C18 rebuilding of the dockyard, and one of a fine group of Georgian naval dockyard buildings.
(Sources: Coad J: Historic Architecture of Chatham Dockyard 1700-1850: London: 1982: 147 ; Coad J: Historic Architecture of the Royal Navy: London: 1983: 67; Coad J: The Royal Dockyards 1690-1850: Aldershot: 1989: 162-165).