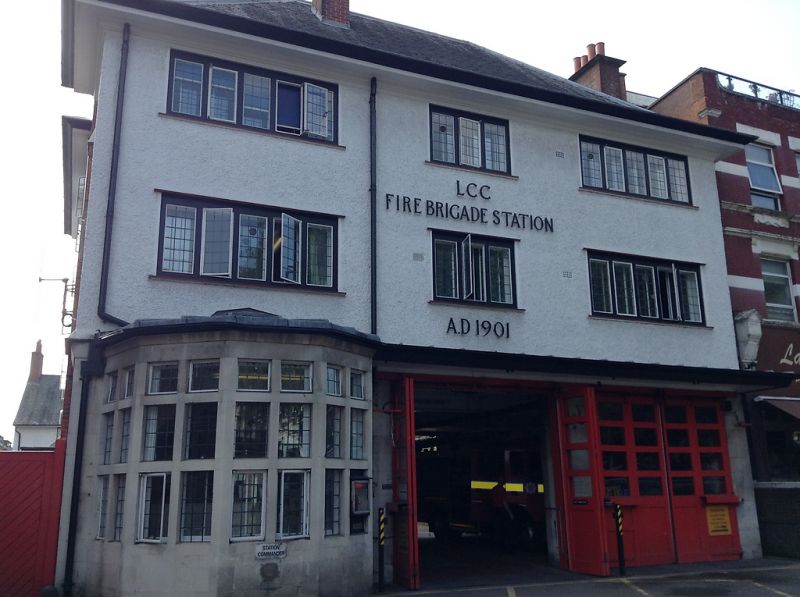 EXTERIOR: Elevation to West End Lane has two bays of part-glazed engine shed manually-operated doors, not the originals but probably installed in the 1920s, and a polygonal bow window of stone with transom and mullion casements. The upper two floors have bands of five-light casements to the outer bays flanking central three-light bands; all the windows have small leaded panes. Affixed to the elevation, in metal, is attractive period capital lettering which reads: LCC / Fire Brigade Station / A.D 1901. The striking, tall roughcast watch tower rises from ground floor level to appear above the roof; this has a wooden belvedere with copper pyramidal roof. The return to the south has further casement windows plus a bay window with stone mullions. To the rear is a double gabled wing with a polygonal bow window on the right hand bay and three-light casements to each floor above. To the left is the rear access to the appliance room, with replaced doors, above which is a first floor balcony bounded by iron railings. The vast majority of the original windows survive.

INTERIOR: The plan form is largely unaltered, aside from some removal of a small number of partitions, and contributes to the special interest as a bespoke solution to the constraints of the site and the decision to employ a domestic style. Other features which contribute to the special interest include: the stairwell, corridors and landings lined with russet glazed brick; original metal staircase handrail and balustrade; ground floor mess room with half-height panelling, large segmental arches to window alcoves, bracketed mantle-shelf and a segmental-arched panelled door (the fireplace surround has been removed); watch room with similar large arches to the bay window alcove; segmental arched doorways, some in glazed brick and the original timber doors; the simple fireplaces and other joinery on the upper floors; the Jacobs ladder inside the watchtower.

HISTORY: West Hampstead Station was constructed during the period when the Brigade's most characterful buildings were built. At this time, the Fire Brigade was part of London County Council and from 1896 new stations were designed by a group of architects led by Owen Fleming and Charles Canning Winmill, both formerly of the LCC Housing Department. They brought the avant-garde approach which had evolved for new social housing to the Fire Brigade Division, as the department was called from 1899. While some stations were built to standardised plans, others were highly experimental, sensitive to local context, and designed to a bespoke plan. The exemplars are Perry Vale, Euston, East Greenwich and West Hampstead. Like Perry Vale, West Hampstead has clean simple lines that speak of modernity, traditional materials of stone and brick, and vernacular forms such as canted bays, leaded casement windows within stone mullions, and flared eaves. The job architect, W A Scott, designed the station to fit a constrained site in a suburban location, rejecting the standardised plan of a multi-storey municipal building with firemen's accommodation on the upper floors in favour of a three storey domestic-style station supplemented by four firemen's cottages to the rear (qv).

The foundation stone for West Hampstead Station was laid on the 24 June 1901 by the Chairman of the Fire Brigade Committee of the LCC, J D Gilbert. The area had formerly been served by stations at St John's Wood (of 1870) and Hampstead village (of 1874) but the suburbanisation of the area necessitated further provision. As described by The Fireman journal in August 1901, West Hampstead was a 'district which until quite recently was open fields, but which is now almost entirely built over, and will, it is estimated, before many years have a population of 200,000'. The station originally housed horse-drawn engines and had stabling for four horses, probably situated at the back of the appliance room, and accommodation for a station officer, nine firemen and two coachmen and their families.

REASONS FOR DESIGNATION: West Hampstead Fire Station is listed at Grade II for the following principal reasons:
* of special architectural interest as one of a remarkable series of fire stations built by the LCC between 1896-1914, each executed to a bespoke design, which are widely admired as being among the most accomplished achievments of this exceptionally rich and prolific period of LCC civic architecture;
* a clever interpretation of an Arts and Crafts-style house, with deep eaves, rough-cast walls and projecting stone mullion bay windows, which are harmoniously combined with the signage, appliance bays and striking watch tower that identify the building's municipal purpose;
* excellent level of survival of original exterior, interior plan and features;
* it exhibits the quality of materials and attention to detail which are the hallmarks of LCC design;
* group value with the listed firemen's cottages to the rear.