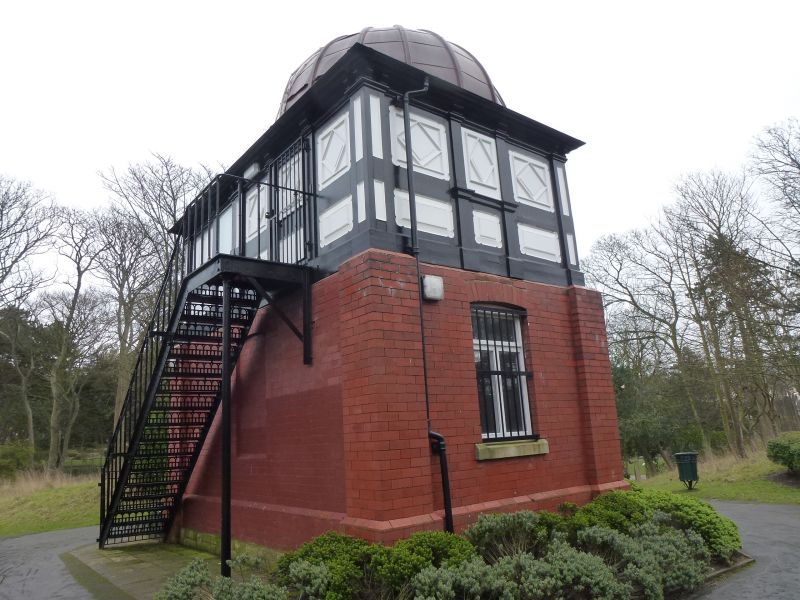 EXTERIOR: 2 storeys, one first-floor window. Plinth; pilaster strips to lower storey clasp angles. Ground floor: pair of round-arched entrances (alike): 2 steps to board door with blind fanlight; arch with keystone and imposts; to rear a flight of steps giving access to first floor; ends: to right a casement window in plain reveals with sill and cambered arch; similar opening to left now bricked up. First floor: rectangular and square panels in imitation of timber framing, panels have raised lozenges and rectangles; to front facade at left a plate glass window with pilastered architraves; similar window to right return; flight of steps to entrance, a similarly panelled door at rear. Dome to off-centre left.

INTERIOR: remains intact with telescope. Painted inscription around dome: "Psalm XIX-I THE HEAVENS DECLARE THE GLORY OF GOD; AND THE FIRMAMENT SHEWETH HIS HANDYWORK". Below the inscription a frieze with fielded oblong panels. Ribs to dome. Two panels in dome open, but the whole dome is on casters and will revolve allowing a rotating view.

HISTORY: Baxendell was a meteorologist and astronomer who retired to Southport from Manchester to supervise the opening and running of the Meteorological Observatory in Hesketh Park (now removed), which had been funded by John Fernley (1796-1873). The astronomical observatory, which was originally located at Joseph Baxendell’s home in Birkdale, was donated to Hesketh Park by Baxendell’s family following his death. It was erected in 1901 and was intended for the benefit of the local residents and school children of Southport. The telescope has a longitude of 2 degrees 59 minutes and 8 seconds west and a latitude of 53 degrees, 39 minutes and 25 seconds north. It is 12 feet above sea level.