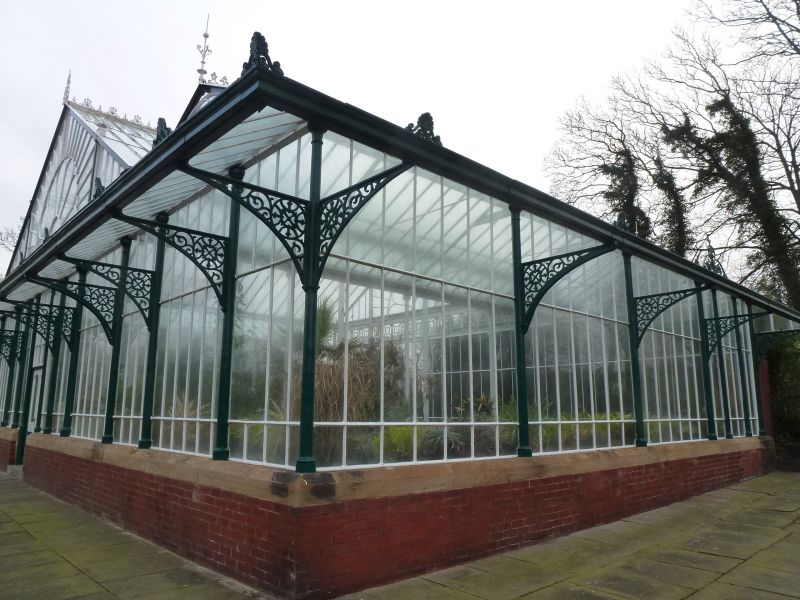 Conservatory. Probably mid to later C19, originally at
Brunswick Villa, Lord Street, but bought by Corporation and
re-located in Hesketh Park in 1878; slightly altered.
Cast-iron and glass on brick plinth with sandstone coping.
Rectangular plan in the form of a nave with aisles at
right-angles to the main axis, under a 3-span roof.
EXTERIOR: single storey, with a facade of 3 unequal gabled
bays, the centre much wider and higher than the outer bays.
Symmetrical; coped plinth approx. 1m high, cast-iron columns,
glazed walls and roof, and a single-pitched glazed canopy
carried round. The glazing of the walls consists of a band of
square panes at the base with 2 tiers of tall panes above;
former central doorway has been replaced in matching style.
The canopy, carried on large open-work brackets, has a moulded
gutter with acroteria and scrolled cresting to the centre.
Above the canopy the central element has a clerestory of
oblong tilting casements; and all 3 gables have radiating
glazing bars forming petal-shaped panes. Apex and ridge
cresting to all 3 roofs.
End walls similar, with doorway in left end; rear similar to
front but with glazing painted white and no canopy.
INTERIOR: not inspected.