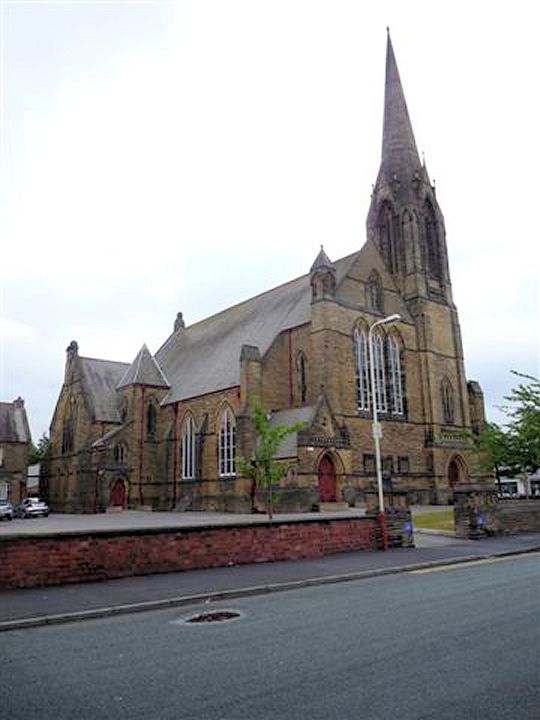 Methodist church. 1878-80. Coursed sandstone rubble, slate
roofs. Early English style. Nave with wide north and south
transepts, short chancel, south-west porch-steeple and
north-west porch.
EXTERIOR: tall nave of 5 bays in all, of which 2 at the east
end are covered by the transepts while the westernmost is
stepped in, with the steeple in the south angle and the porch
in the north angle. The gabled west front has string courses
on 3 levels and a square corner pilaster to the left
terminating in a small turret with pyramidal roof. Tall
tripartite west window of 3 lancet lights with moulded
mullions and surround, each light divided by a slender mullion
into 2 minor lancet lights.
Projecting from the angle to the left is a steeply-gabled
porch which has a 2-centred arched doorway chamfered in 2
orders, a weathered band surmounted by a band of pierced
trefoils and a set-back gable with an oculus and raised coping
with a finial.
To the right the steeple has a similar doorway and weathered
band, a tall set-back upper stage with angle buttresses, a
2-light window to the second stage, a very tall belfry stage
which has square corner pinnacles flanking traceried and
louvred 2-light lancets under steeply-pitched gablets, and an
octagonal spire rising to a height of 150 feet; and on its
south side is a gabled projection with a 2-light window
flanked by buttresses.
The nave is buttressed and has 2 large 2-centred arched
3-light windows. Each transept embraces on its west side a
square turret rising above eaves level, with a lancet in each
exposed side and a pyramidal roof, and a lean-to porch in the
angle with the turret, with a 2-centred arched doorway and a
2-light window above this; a buttressed gable wall with 3
lancets at ground floor and a large 2-centred arched window of
4 lancet lights above.
The chancel has a plate-traceried rose window.
INTERIOR: with arch-braced wooden roof; galleries at the west
end and in both transepts; chancel with mosaic floor and fine
9-panelled painted reredos in which panels depicting fig,
wheat, vine and olive alternate with Commandments and Lord's
Prayer, under a coved arcaded canopy.