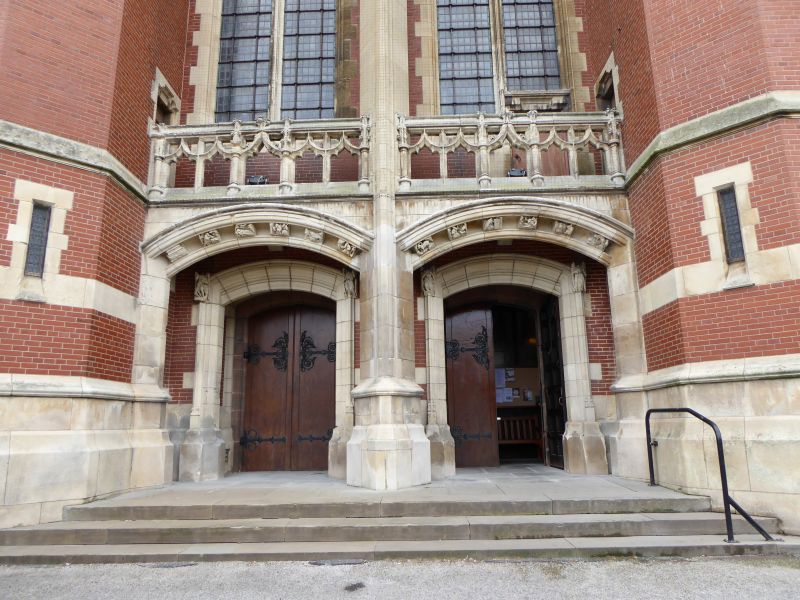 Church; the third on this site since 1837. 1895-1913, designed
by Huon Matear of Liverpool, built by Messrs. Woods of Bolton
(organ chamber, crypt and vestries 1895; nave and aisles 1903,
north transept 1909-11, west front and tower 1912-13). Glazed
red brick with dressings of Portland stone and some sandstone
(tower pinnacles renewed late C20 in fibreglass), slate roof.
STYLE: Free Perpendicular.
PLAN: nave with north-west tower, north and south aisles,
north transept, chancel with north chapel and south vestry.
EXTERIOR: the 4-stage tower, the lower half of brick with
stone bands and the upper of stone, with plain angle
buttresses carried up as pinnacles embracing the top stage,
has a crocketed west doorway protected by a gabled stone arch
with carving and a north doorway under a gabled stone arch
enriched with wheat ears; an elaborate third stage with a tall
moulded arch in each side containing a traceried and louvred
3-light window with attached clock-face, an open-work balcony
below carried on a segmental arch flying between the
buttresses, and a crocketed gablet above; octagonal top stage
with blind tracery, stepped parapet and short flying
buttresses to the pinnacles.
The west front of the nave has large octagonal corner turrets
linked by a flying 2-centred arch containing three 2-centred
arches, each with a tall recessed 2-light window; below these
windows a balustraded balcony on a pair of segmental arches
protecting 2 segmental-arched doorways; above it is a stepped
gable with blind arcading.
The south aisle has a gabled porch and 4 bays of 2-centred
arches each containing a large 4-light window with
Perpendicular tracery; the north aisle has 2 bays in matching
style, then the transept with coupled gables each with a
3-light window.
The 3-bay chancel has flying buttresses over the north chapel.
INTERIOR: very lofty 5-bay aisle arcades of octagonal columns
without caps, and 2-centred arches moulded in 3 orders; 2-bay
north transept with cylindrical column carrying longitudinal
and transverse arches forming 4 cells of wooden rib-vaulting;
large chancel arch containing a fine wooden rood screen with
integral pulpit; chancel with rib-vaulted roof. Organ case on
south side matching the screen, 2-bay north arcade filled with
elaborately traceried wooden and glazed screen; elaborately
carved and painted reredos triptych.
Stained glass includes good memorial window to Lieutenant Eric
Wood (killed Ypres 1916).