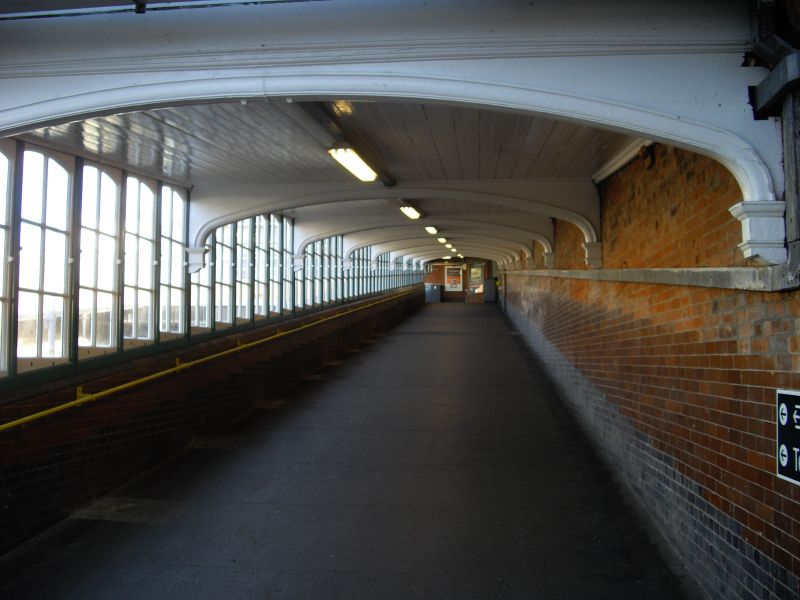 Railway station. 1901 for the London, Brighton and South Coast Railway, Chief Engineer Charles Morgan. Queen Anne style. Polychrome brickwork, red brick with blue engineering and gault bricks laid in bands with red sandstone window dressings and yellow sandstone window arches, copings etc and roof of Welsh slate; cast iron and steel platform canopies. Station with offices built on the bridge and platforms in the cutting below. Single storey at street level. Six bay front thus 1:4:1 with the end bays set forward and with a mullion-and-transom window. Arched doors with overlights in the centre. The whole front is covered by a canopy on four cast iron columns with a scalloped valance. The centre four bays are roofed by a pyramid rising to a rectangular lantern with a lead bellcast roof. The side walls have three decorative gables, the north one is blind, the south one has two tripartite arched windows with decorated heads. The rear wall has four arches with windows to the booking hall above the footbridge roof. The interior of this building has a large open booking hall with timber roof trusses tied with wrought iron ties and a central lantern. This leads through to the footbridge and platform ramps which are all roofed with elliptical trusses and have glazed side walls. The two platforms have their canopies all complete; timber with scalloped valances on cast iron columns and brackets.
History: The first Bexhill station opened in 1846 on the London and Brighton Railway's line built by the Brighton, Lewes and Hastings Railway but taken over on opening, by which time the LBR had itself become the LBSCR. The present station was built in response to the challenge of the South Eastern and Chatham Railway's new branch line to Bexhill which opened in 1902 and because of the growth of Bexhill as a seaside resort and its popularity with private schools.
References: R.V.J.Butt, The Directory of Railway Stations, Patrick Stephens Limited, 1995. C.Awdry, Encyclopaedia of British Railway Companies, Patrick Stephens Limited, 1990, p 180.