A Grade I Listed Building in Tidenham, Gloucestershire 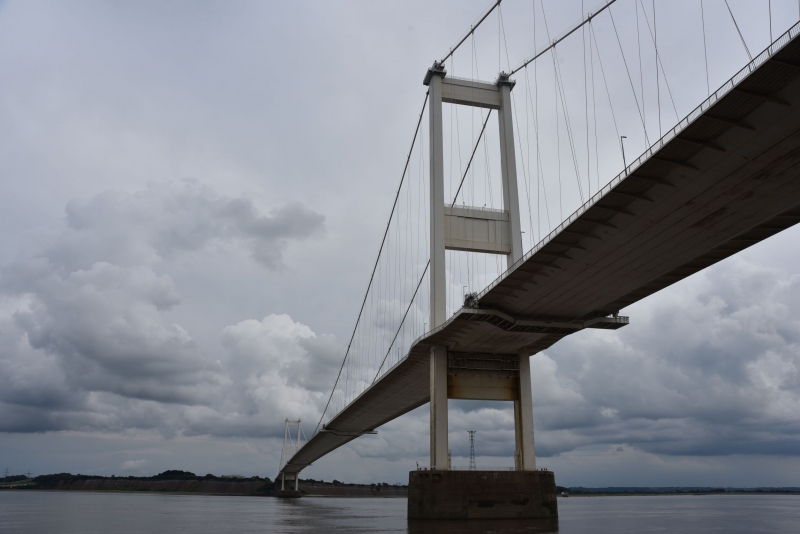 Includes: Severn Bridge and Aust Viaduct, First Severn Crossing, M48 Motorway, Beachley,
Tidenham.
Motorway bridge over River Severn and its eastern approach viaduct. 1961-1966. Freeman Fox and Partners in association with Mott, Hay and Anderson; consulting architect Sir Percy Thomas. Bridge has steel cables, deck and towers, concrete substructure and foundations (cable anchorages and piers for towers); viaduct structure steel with concrete deck slab. Suspension bridge (spans 1000ft. -3240ft, -1000ft.) with aerodynamically shaped deck and inclined hangers; first bridge in the world to be built with these features. Viaduct 514ft. long, has three spans consisting of two box girders acting compositely with concrete slab.
Part of the First Severn Crossing for the M4, consisting of Aust Viaduct, Severn Bridge and Wye Bridge (qv). Strengthened and refurbished 1985-91 without seriously changing appearance. Bridge recently repainted white to reduce thermal stress (not original colour, but successful).
This is the first bridge in the world to use the revolutionary concept of the streamlined deck and inclined hangers, and was an early example of a fully welded steel deck. It was by far the longest span in England when it was built.