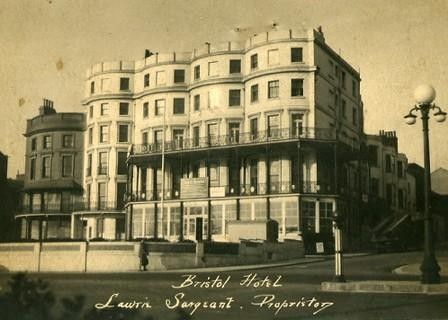 Also known as: Nos.5-12 (consec) Bristol Court MARINE PARADE.
Hotel. 1835. Designed by William Hallett who was also the
proprietor. Converted into flats and public house in 1935.
Stucco. Roof of left-hand ranges of slate, the rest obscured
by parapet. Left hand of No.142 5 storeys and attic, the rest
EXTERIOR: 4 storeys and attic, all over half basements.
12-window range in all, the elevation treated as a series of
full-height segmental bays, each of 3-window range. The ground
floor originally treated as rustication, which survives on the
left-hand bay only. All windows flat arched with architraves;
above each first-, second- and third-floor window is a cornice
supported on a pair of console brackets. Continuous across all
bays is a cornice between the top floor and the attic; cornice
to attic; in addition a sill band between second and third
floor on all but the left hand bay. The centre attic window in
the left hand bay range is blocked; the same unit has
first-floor balcony with cast-iron railings supported by
cast-iron Tuscan colonnettes and spur of party wall with
No.140 Marine Parade (qv). In the late C19 or early C20 a
2-storey porch added to all but the left-hand bay range, the
uprights of the glazed ground floor are treated as octagonal
colonnettes and supports the first-floor balcony; likewise the
second-floor balcony is supported by cast-iron colonnettes,
these designed in the Tuscan order and placed on high socles;
both porches are enclosed by cast-iron railings. Flat-arched
entrance in porch, in front of second bay range, and another
under the porch on the return. Some sashes of an original
early to mid C19 design on the return: in second- through
4th-window range, first floor to attic, 12 x 12, 8 x 8, 4 x 8
and 4 x 8 respectively. Return steps down to a lower range,
which contains a 3-storey segmental bay of 2-window range.
INTERIOR: not inspected.
Built as the Bristol Court Hotel on land owned by the Marquis
of Bristol.
Nos 137-143 Marine Parade (qv) form a group with Eastern
Terrace (qv).