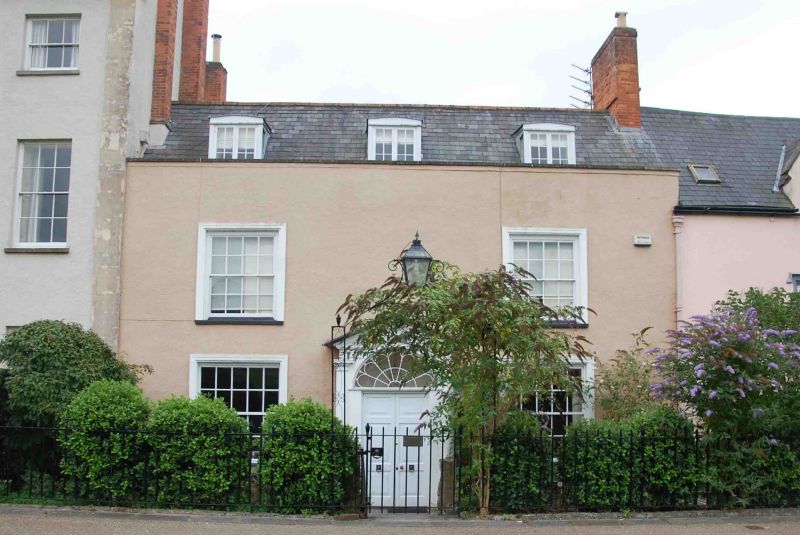 House in row. C17 or earlier, remodelled in C18 and C20.
Rendered and colourwashed, Welsh slate roof, brick chimney
stacks. Rectangular plan, roofed parallel to street; stone
newel stair to rear, and rear right wing making L-plan; wall
thicknesses in rear wall to right suggest earlier provenance.
EXTERIOR: 2 storeys with attics, 2 wide bays; sashes with
raised and moulded timber architraves. 3 C20 segmental-roofed
dormers with 2-light small-pane casements behind parapet; at
first floor are two 16-pane sashes, and ground floor has
20-pane. Central entrance through a C20 porch fashioned from
C18 materials, attached Doric columns carrying part
entablature with triglyphs and open pediment, framing a pair
of 3-panel doors with semicircular cast-iron fanlight over
having decorative radial glazing, (said to have come from
Dublin: the columns said to have come from a convent), and
with glazed cheeks. Stacks to left.
Rear elevation has one 3-light ovolo-mullioned window, and the
jambs of two reserve-chamfer windows below, as well as traces
of other former windows.
INTERIOR: has more columns, and a dado said to come from a
Bristol bank, the north-east ground-floor room has a C18
ceiling cornice and panelling, and a bolection-mould fireplace
with later cast-iron insert. The north-west room has early C18
dado panels, chamfered ceiling beams, and two semicircular
wall niches, one flat headed and one semicircular arched, with
shaped shelves.
South-west room has crossbeam with chamfer, bead stop and
runout, and in rear wall a 4-centre arched opening. Main
staircase c1800 with alternating chamfer stick and barleysugar
twist baluster. On first floor the north-west room has a
3-panel door, dado rail and heavily moulded plaster ceiling
with central wreath and other decoration, all front windows
have shutters.
At rear of building is a stone newel staircase with a 6-panel
door at foot, some C17 panelling (not in original location),
and an early C17 balustrade at top with alternate turned and
plank balusters, turned newels with knobs. (Although much of
the work is original, some material has been imported by a
previous owner who was an antiques dealer).
SUBSIDIARY FEATURES: extending from the corners of the front
elevation, with front boundary railings about 5m from house,
are railings set on very low stone plinth, the rails having
necked tops and the standards cast-iron urn finials,
wrought-iron overthrow for lamp over gateway, opposite porch,
the whole contributing to the setting of the house and the
general streetscape.
The property backs onto (and was formerly part of) Nos 21 and
23, Market Place (qv).