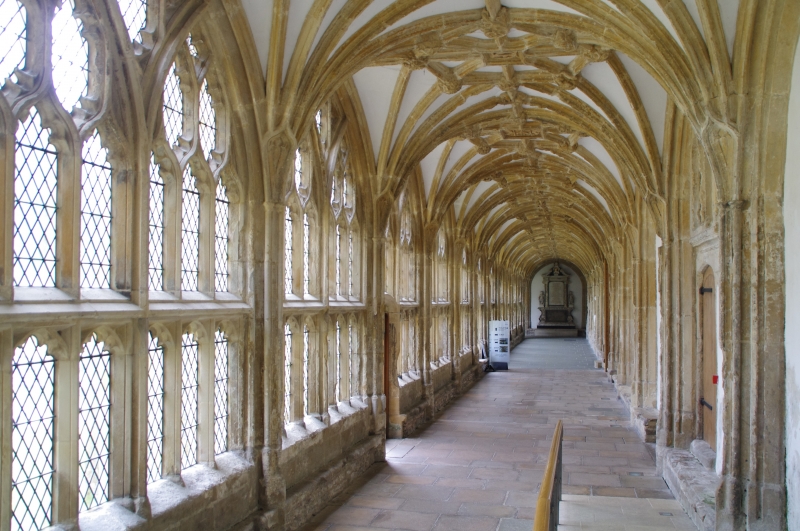 Cloisters. Early C13. The walks renewed in three stages in C15: 1420-35 to east; 1460-70 to west; 1490-1508 to south. Doulting ashlar with pink rubble to outer walls; lead roofs. Inner sides have two storeys of thirteen bays to the north and south ranges, and a single storey of eleven bays to the east, articulated by buttresses to a drip and coped parapet. Each bay has a full-width six-light window with a shallow arch springing from the buttress sides, with Perpendicular tracery and a transom; on the first-floors are two flat-arched mullion windows with trefoil heads, and gargoyles over alternate buttresses, though none on the east range.

The north bays are narrower with shallow-arched doorways; on the north range project two low, shallow paired arches with weathered coping to bays four and six from the north. The early C13 outer walls of pink rubble, formerly rendered, with late C15 upper walls and buttresses: the south range has C14 crenellated gables each end, that to the east with an early C13 trefoil-arched entrance containing a cinquefoil cusped doorway and C13 door.

The east range has a semi-octagonal stair turret at the north end; the three north bays formerly the 1488 west wall of the Cloister Lady Chapel are ashlar, the outer ones with four trefoil-arched mullion windows, the central bay with a doorway beneath a shallow gabled cornice, with good tracery panels with ogee cinquefoil heads and two upper mullion windows, and extending onto the flanking buttresses.

Vault shafts with mouchettes to the springers of lierne vaults forming octagons, with bosses and central carved panels; the west range has an external segmental-arched doorway with stiff leaf capitals four bays from the north, and a Tudor-arched doorway in the first bay from the north; the entrance to the south transept set to the right of the cloister, with an early C13 arch of two orders one a richly-carved foliate arch, on banded shafts, with a Perpendicular panelled ribbed door. The first-floor library in the east range c 1430 has arch-braced cambered tie beams, with eleven C13 head corbels to the north end, and a roll-moulded ridge.

MONUMENTS: There is a generous scattering of wall tablets in the three walks, mostly of the late C18 and C19, and generally of white marble. Numbering bays from the left those of special interest include:

East walk, bay three a large baroque cartouche to Richard Healy of 1713, and plainer tablet to Nathaniel Palmer, d 1706: bay six has a carved tablet above a moulded tomb or door surround, and in bays seven and eight, set to the wall at bench level, two large carved bosses from Stillington's chapel; in bay eleven a large plain panel to William Claver Morris, d 1726, surmounted by a marble bust, and carried on a florid coat of arms; bay thirteen has a large plinth memorial to Peter Davis, carved in 1749 by Benjamin Bastard of Sherborne. On the plinth a weeping cherub, against a lofty dark marble pyramid.

The west walk has many scattered tablets, but in bay six a large high relief figure in white marble on plinth to John Phelips, d 1834, signed by Chantrey.

This entry was subject to a Minor Amendment on 19 February 2018.