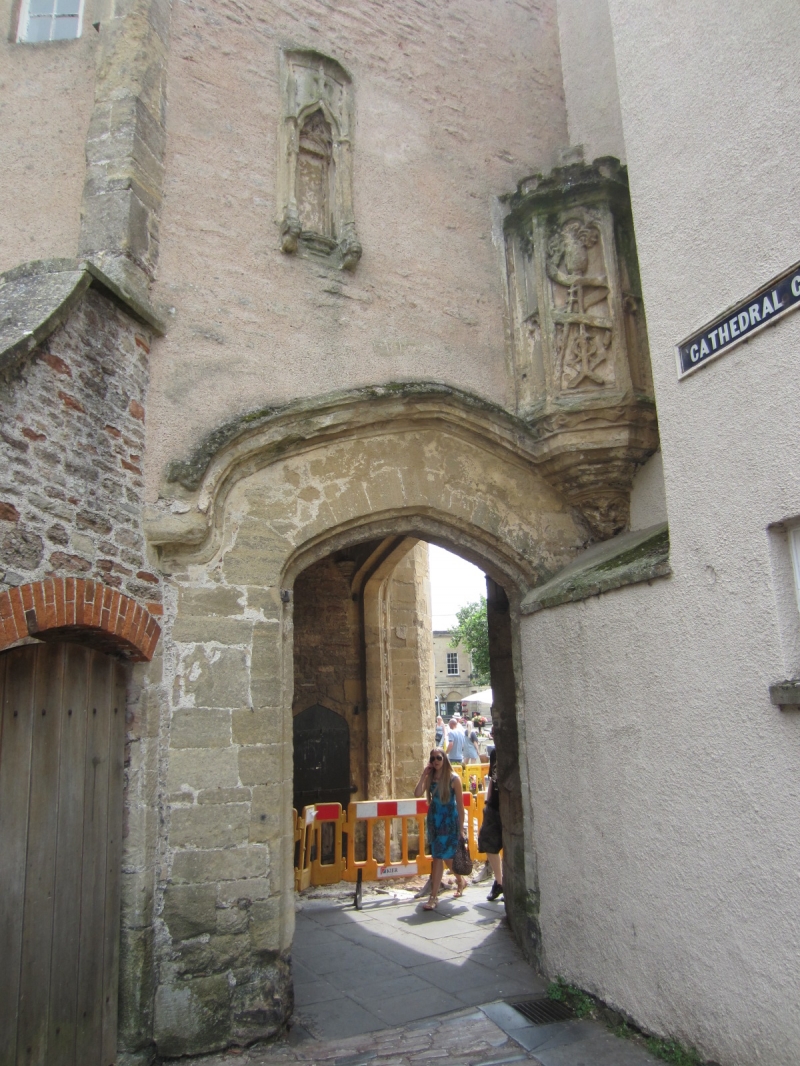 Gateway to Cathedral Green. c1450, built by Bishop Bekynton.
Doulting ashlar stone, with lead roof. The upper floors
communicate with and are used by the occupants of No.16 (qv).
EXTERIOR: 3 storeys, single bay, exposed on west and north
sides only. Plinth, moulded strings between floors and under
battlemented parapet, octagonal south-west corner turret. West
face has 4-centre arch with rosettes set in mouldings, carved
spandrels with letter TB (for Thomas Bekynton) interwoven with
foliage; first floor has two windows set slightly proud, a
double-and a single-light, with cinquefoil cusping to ogee
tracery under flat heads, and between them a carved angel
figure bearing a coat of arms, further shields in cusped
recesses under windows; second floor panelled, with two
2-light windows with blank underpanels, with worn statue
niches between them and to either side.
The north face has a plainer 4-centre arch with arched label,
a corbelled panelled feature in the northwest corner at first
floor level and a double-ogee arched statue recess to the
left, otherwise the two upper floors rough-rendered and plain,
with string and battlemented parapet, angled buttress to
north-east corner, and rendered lean-to building set in front
of the main east building.
In the S wall are two doorways, one plain 4-centred, the other
a late C18 pedimented elaborate lierne vault.
INTERIOR: there is a single room at each upper level. The
first floor has C17 panelling with pilasters, including
panelling to seats in window embrasures, and a bolection-mould
fireplace to the E. In the SE corner, behind a C17 door in a
4-centred arch is a recess, possibly a former garderobe. The
spiral stair in the SW corner has stone treads to the lower
flight, but wood treads to the upper flight. The upper room
has a 2-bay arch-braced roof with wind-bracing. On the S side
are very large moulded brackets or corbels, and a small cusped
lancet.
HISTORICAL NOTE: the porch is said to be so named as it was
the spot where beggars normally sought alms; a stone bench
runs along the E wall.
(The Buildings of England: Pevsner N: North Somerset and
Bristol: London: 1958-: 311).