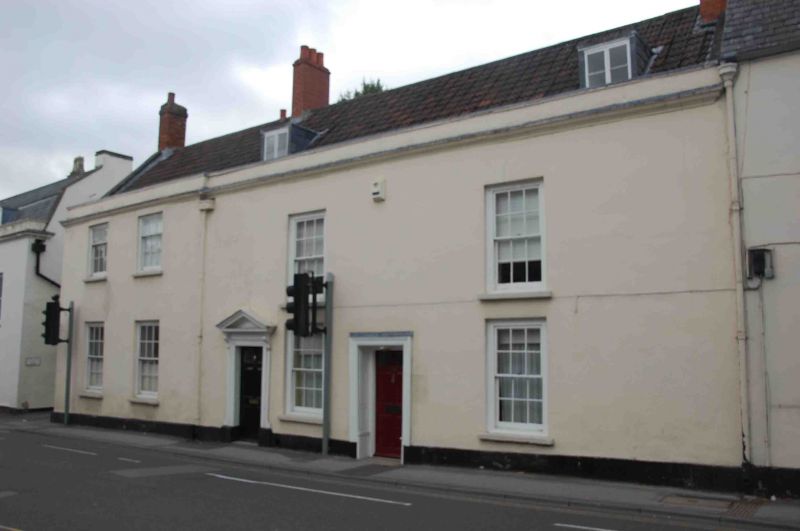 Dwelling, one half of a formerly larger house; the other half is 20A Chamberlain Street (Grade II). Medieval origins, with later alterations, probably dating to the first half of the C18, including refronting and internal refurbishment. Early-C21 alterations and rear extension.

Dwelling, one half of a formerly larger house; the other half is 20A Chamberlain Street (Grade II). Medieval origins, with later alterations, probably dating to the first half of the C18, including refronting and internal refurbishment. Early-C21 alterations and rear extension.

MATERIALS: the house is constructed of stone rubble and brick, and is rendered and colour-washed, under a triple-roll clay tiled and slate-clad roofs. There are coped gables to the left, and the rear range is half-hipped at its east end. Brick ridge stacks to the gable ends and to the left of the entrance.

PLAN: rectangular, double-pile plan; originally part of a larger L-shaped house. It comprises two parallel ranges; the one to the rear probably of the first half of the C18. There is a single-storey, flat-roofed addition of the early C21 to the rear.

EXTERIOR: the house has two storeys with attics, and a basement beneath the rear range. The principal (south) elevation fronts onto the street. Bays one and two (to the left) break forward slightly, and to the right is a six-panel Regency pattern door with a shouldered surround, timber moulded architrave and a pediment hood on console brackets. There is a plinth, a moulded cornice and a plain parapet; these continue onto 20A Chamberlain Street (Grade II). The sash windows have exposed boxes and architrave surrounds. The two ground-floor windows have twelve panes; those to the first floor have nine panes. The only opening in the left return is a first-floor, later C19 sash window in the front range. The rear (north) elevation has sash windows with exposed boxes, including a round-headed stair window to the far left.

INTERIOR: there are two principal ground-floor rooms leading off the entrance hall. The front room has a highly-decorative Baroque scheme of high-quality, carved timber which is considered to date from the 1720s. It has a modillion cornice with dentils and floral motifs in the interstices; a chair rail with gadrooning; recessed panels to the walls above the chair rail; and skirtings carved with scrolled acanthus and beading. The walls have recessed panelling. The chimneypiece has a grey marble inset within an eared surround carved with shells, foliage and beading, with a foliate frieze and a moulded and carved mantel. The mirrored overmantel has a pediment and an eared surround with egg and dart mouldings and carved shoulders festooned with fruit. The windows have panelled shutter boxes, eared architrave with scrolled shoulders. Of the three, six-panel doors, two have ornamental door cases with beaded architrave, a frieze of acorns, oak leaves and ribbons and a flat-moulded cornice; the third door, of later date, has a plainer surround and opens into the rear room. At the north end of the entrance hall is a segmental-headed archway with a moulded cornice that leads into the rear part of the house and to the stairs. Beyond the archway is a blocked doorway which formerly opened onto the other half of the building (now 20A). The decorative plaster scheme in the rear principal room is considered to be of slightly later than the one in the front room, dating from around the 1730s. It has a modillion cornice with dentils; a moulded chair rail and raised and fielded panels to the walls. The fireplace has a plain surround and mantel, flanked by reeded pilasters with composite capitals and a plain entablature; they frame raised and fielded panels to the overmantel. A doorway in the back wall, which previously opened onto the garden, provides access to an early-C21 kitchen extension.

The staircase is oak. It has an open string course with moulded tread ends, scrollwork and foliate brackets, a reeve curtail and a ramped handrail; there is timber panelling to lower part of the walls. There are three turned balusters per tread; the central one has a barley-twist design. The ceiling above the stairs has a plaster cartouche with a central foliate boss, flanked by two heads representing Youth and Age, and a diamond and geometric pattern, set within a moulded frame. This is supported by relief carvings of a male and a female figure among drapery and acanthus leaves, perhaps a faun and a dryad respectively, within a rectangular frame edged with delicate carvings. Several of the first-floor rooms retain early-C18 fireplaces with hob grates. The rear bedroom has raised and field panels below the moulded chair rail, though it is understood to have previously been fully panelled. During renovation work in the early C21 sketches and the signature of a Robert Davis, dated 1731, were uncovered on the walls in this room, but have since been covered over. The doors throughout are mostly of six panels; a four-panelled door leads to the cellar.

The roof to the front range retains pegged principal rafters, a large chamfered tie beam with slots, probably for a closed truss, and a mix of threaded and staggered purlins. These timbers have been reinforced with later purlins and common rafters.

SUBSIDIARY FEATURES: the large garden plot (sub-divided in 2004) to the rear is bounded by random stone rubble walls of varying heights and different dates of construction. The wall on the west side has been subject to repairs and substantial rebuilding, and is capped with concrete. A break in the wall provides access to the garden of 22A (constructed in 2004).

This building (the attached 20A which forms a part of it is separately listed at Grade II) on Chamberlain Street has an evolved plan with its origins in the medieval period. Documentary records (Wells Cathedral Archives, see Sources) relating to various leases on the building indicate that it formed part of the estate of the College of Vicars Choral, the men of Wells Cathedral Choir, from at least the mid-C16. The Vicars Choral, which was founded in 1348, was an independent corporation whose estates provided most of the income for their salaries; yet they were responsible to the Dean and Chapter for their duties in singing the Cathedral services. The house on Chamberlain Street appears to have once comprised two principal ground-floor rooms within the front range and a service range to the rear, perhaps with accommodation for servants at attic level. The left-hand half of the building (22) was extended to the rear to provide an additional room on both floors, but it has not been possible to establish the date this was added. The building underwent substantial refurbishment during the first half of the C18 when a programme of improvement was carried out. It is depicted on Simes’ Plan of the City of Wells of 1735, but the façade illustrated on the Plan differs from that of the current house, though this may because the plan is a stylised representation and not completely reliable.

In 1860 the freehold of the house was sold to Henry William Livett (b 1815), a physician and surgeon, who was Mayor of Wells in 1860 and 1861, and later became the city’s Medical Officer of Health. The building provided a doctor’s surgery until 2004 when it was sub-divided into two separate dwellings. As part of the work an existing rear extension was demolished; the front entrance that had previously been sealed-up was re-opened and a single-storey extension (kitchen) was added to the rear. The windows in the rear elevations of the right-hand part (20A) were renewed. Some internal reconfiguration was also carried out, such as the construction of a party wall in the front range to divide the two properties, the creation of an entrance hall to 22 and, within 20A, the removal of some partition walls and the insertion of a staircase.

22 Chamberlain Street, previously one half of a larger house with medieval origins and later alterations, including probable C18 refronting and internal refurbishment, and early-C21 alterations and a rear extension, is listed at Grade II* for the following principal reasons:

* the possession of a wealth of high-quality Georgian timberwork, plasterwork, joinery and chimneypieces which are of high quality throughout, and the theatrical, yet intimate drawing achieves a remarkable spatial drama;
* its lavish internal decorative scheme demonstrates craftsmanship of the first order;
* as a particularly interesting example of one half of an early-C18 town house which retains medieval roof timbers;
* the articulation of the principal elevation and the good use of materials, combine to produce an elegant composition.

* for its strong association with the Vicars Choral of Wells Cathedral, whose estate the building formed part from at least the mid-C16 until 1860.

* it has strong group value with a large number of other houses in the immediate locality of a similar style and date which are also listed.