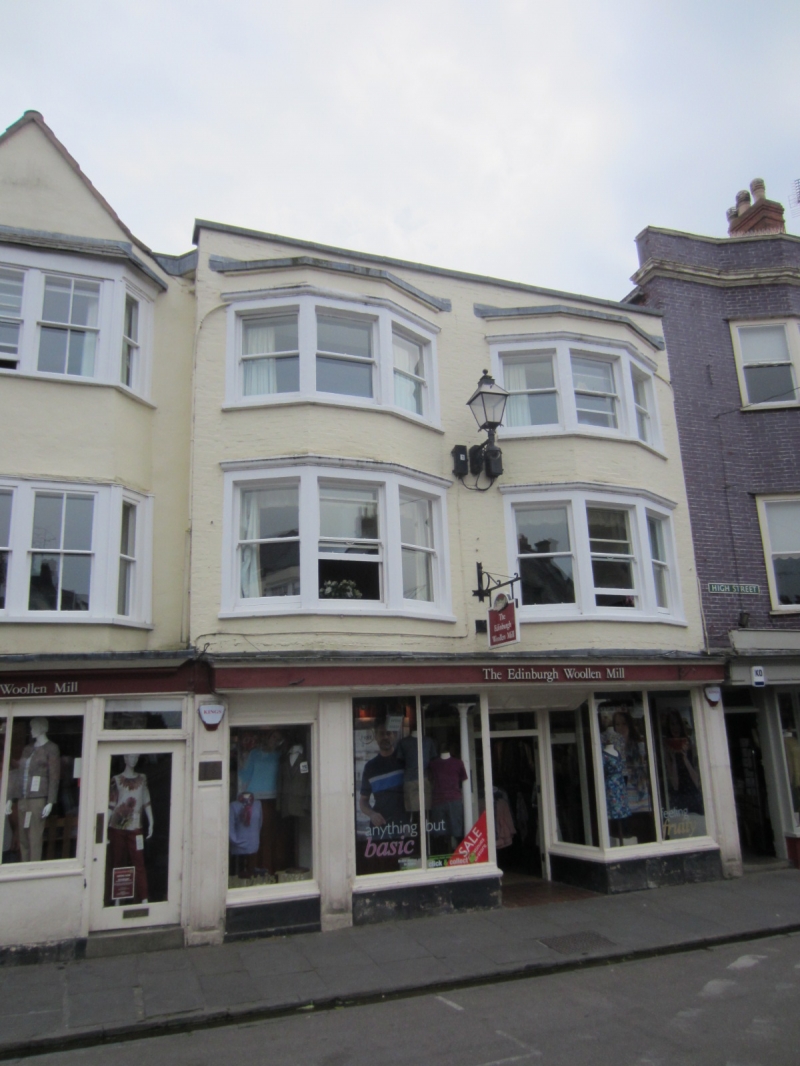 House, now shop, with continuation of hotel over. Mid C19
facade to C16 or earlier building. Brick colourwashed, with
painted stone dressings, hipped clay pantiled double roof with
ridges at right angles to street, behind parapets. The ground
floor is occupied separately as a shop, opened both to the
rear wing, and to the adjoining No.1 (qv).
PLAN: front range is double-depth plan, with staircase rear
right, and a long rear wing.
EXTERIOR: 3 storeys, 2 bays. C19 shop front across ground
floor, modified, original doorway to left blocked with window,
doors now set in almost central recess, slim fascia with
cornice. Above, very shallow canted bay windows with plain
sash to each facet, with parapet and flat roofs at second
floor level, the main parapet being a little higher.
INTERIOR: the ground floor front has, to the right, a moulded
jetty post and bracket approx 1.5m from the shop-front, with a
deep mortice for a transverse bracket, carrying a moulded
bressumer, partly cut back on the ground floor. The party wall
to the right has a form of wainscot with deep (c300mm) butted
plain planks set between structural posts of the original
framing, and a deep boxed transverse beam carried at the rear
on a further wide (c800mm) boxed beam, and, to the left,
remains of a 4-compartment C16 ceiling with chamfers and stops
to the beams. At this end the front bressumer mouldings have
been cut away. The rear compartment, originally a separate
room, has some heavy close-spaced ceiling joists, and deep
chamfered beams. Across the corner diagonally, to the left, is
a 4-light casement in cast-iron, with cusped heads to the
lights, and small-scale diamond panes.
The rear wing, at a lower level, has 4 transverse boxed beams,
and two composite early C19 4+12+4 pane sashes, complete with
head panelling but with shutters missing. The upper floors
continue the hotel accommodation from No.3 (qv).
At first floor the open lounge has deep chamfered beams, and a
large central boxed beam; the rear wall, formerly external,
includes a 2-light cast-iron casement with diamond panes, and
a door to the stairway with early C18 dog-leg stair to solid
string, fine turned balusters and moulded handrail, returned
to the upper landing. The wing has a corridor to the right,
with a series of bedrooms inserted; some beams cross the
corridor.
The roof over the front range has chamfered wind-bracing; the
second floor of the wing has a series of heavy principals to
the roof trusses, with collars and purlins, and cambered ties,
in 6 bays. The rooms are mostly in C20 detail, but the
chamfered purlins are exposed.