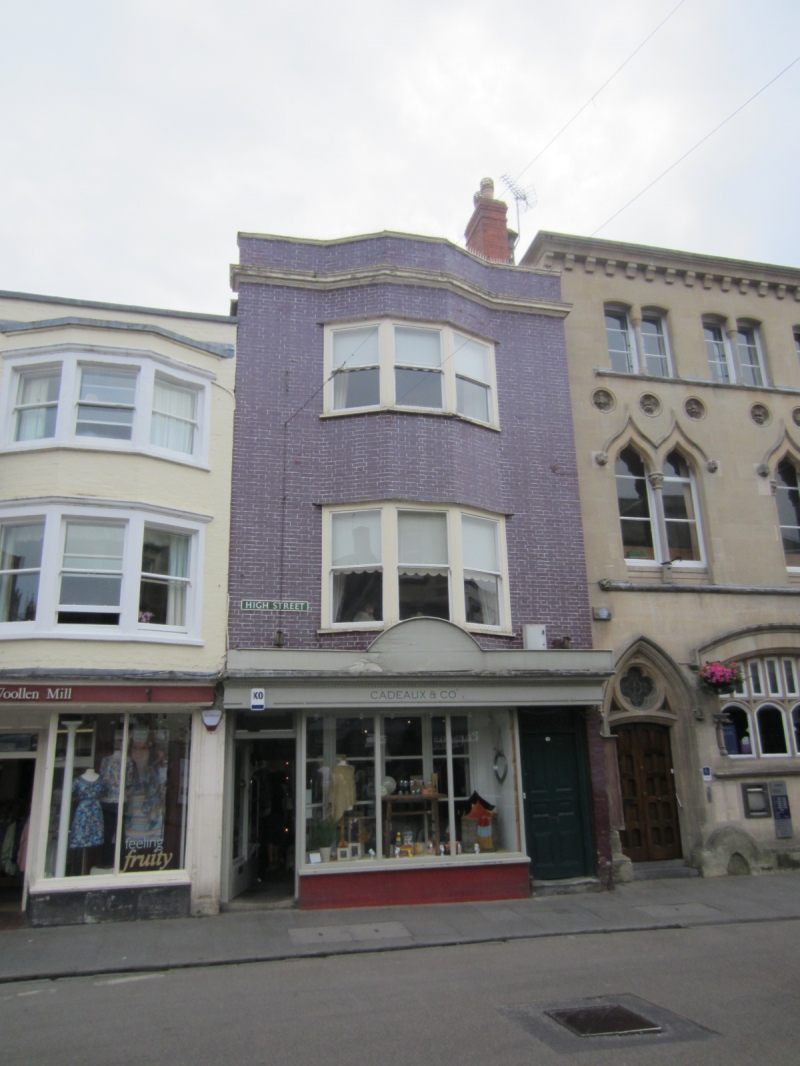 Row house, shop under, and former printing works to rear. Late
C16 remnants, mostly C17, with C18 and C19 alterations.
Brickwork front, probably on timber-framing, rubble, pantile
roofs, brick stacks.
PLAN: the front range, with side entry from through passage to
its right, is double depth, with a generous staircase centred
in the rear half, and twin hipped roofs behind a parapet; the
front part of this block probably rebuilt in the late C18 or
early C19, has high ceilings. Beyond is a very long rubble and
pantile gabled wing with narrow courtyard to the right (W),
and with low ceilings; it retains an early C17 casement
window, and a C17 staircase.
EXTERIOR: 3 storeys, single wide bay. Simple late C19 shop
front across ground floor, with central 3-light window, glazed
shop door to left and 6-panel house door to right, both with
rectangular transom lights, and fascia with cornice, but
shopboard with segmental arched centre portion set on top of
cornice. Above a very shallow canted bay window carried to
full height of coping, with plain sashed windows to each facet
on both floors. The rear door to the through passage has
Gothic interlace glazing.
The wing is also in 3 storeys, with three vertical 6-pane
'industrial' timber lights with horizontal boarded aprons at
eaves level, above 2:3:2-light casements to the first floor.
At ground floor level, left, is a large 6-light stone
hollow-mould mullioned and transomd casement with 2 king
mullions, leading, and early glass, plus some sashes.
The gable end to this range has a loading door above a boarded
apron. Attached to this is a further low wing with large
central glazed lantern with 15:12:12:15-pane fixed casements,
and two 4-vertical-pane lights to its end gable.
INTERIOR: the side passage has a series of early beams in the
rear half. In the rear half of the front range is an early C19
staircase with stick balustrade and turned newels, with
quarter landing and return to an open full landing. The first
floor rear room has a C17 door. At second floor the front room
has a series of cupboards with flush 4-panel doors The rear
wing has, towards the rear, a painted C17 dog-leg staircase
with splat balusters, and square newels with ball finials.
At first floor, immediately adjoining the front range, is a
room with 6 lateral chamfered beams, and in the rear wall a
4-centred doorway and a plank door, and two 12-pane sashes to
the yard. The central room has an C18 fireplace surround with
dentils, backing on a C20 fireplace in the front room.
The second floor has low-pitched ceilings, and in a bathroom
is a 3-light wood casement with ovolo-mould mullions and
leading.
The roof not accessible, but believed to be a C19 rebuild.
An interesting example of early development on the long urban
plot, the whole building incorporating remnants from various
periods, but not altered significantly since the early C20.