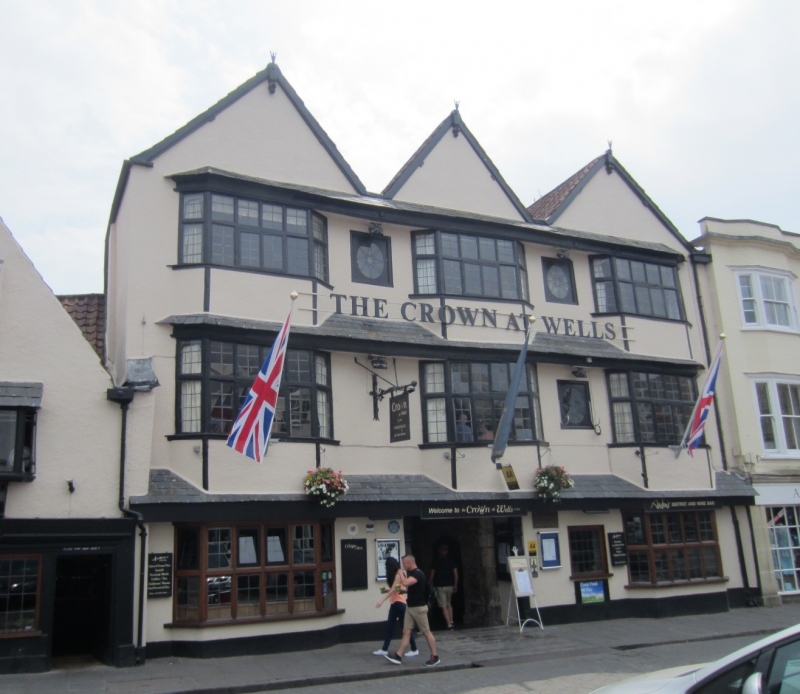 Nos 8 and 10 Market Place (qv) are also incorporated in the
this property. Hotel. Late C16, but incorporating earlier
fabric in rear wing. Rendered, probably over timber-frame,
clay pantiled triple-gabled roof, the ridges at right angles
to the street.
PLAN: wide frontage with central carriageway, and with long
rear wing to right; plan modified, but double depth each side
of throughway, main staircase originally at junction of main
range and wing.
EXTERIOR: 3 storeys, 3 bays. C20 timber canted bays to ground
floor, with throughway under centre bay, flanked by carved
timber posts, and a 16-pane light to its right; above this
floor a slate pentice roof over a shallow fascia. First and
second floors have shallow canted bay windows, of 1+4+1
transomd lights, ovolo mould, with continuous pentice roofs to
each level, all windows rectangular leaded. Between both bays
at second floor level and bays 2 and 3 first floor are
star-leaded upright oval windows in rectangular panels,
between bays 1 and 2 first floor a projecting hanging sign on
wrought-iron brackets. Throughway enclosed at mid-point,
before this traces of moulded jambs in side walls, and on
right a chamfered 4-centre archway.
Rear elevation has several gables at varying levels, with one
wider weatherboarded gable having an early C18 composite sash
window of 12+8+12 panes, with very thick glazing bars.
Extending southwards a 3-bay wing, 2 storeys with attics, also
late C16. Ground floor has a 2-light casement and a
part-glazed door, void bay 2, 2-light casement to bay 3. The
outer bays at first floor level have square oriel windows of
1+5+1 transomd lights, ovolo-moulded, with hipped slate
pentice roofs, set on deep ornamental wood brackets on a
carved wall plate, with carved stone panels between the
brackets, between these a 5-light mullioned window. Attic
windows are 1+3+1 light oriel ovolo-mould mullioned casements,
mostly diamond-leaded, the shallow hipped roofs of the first
floor oriels reaching the sills of these upper windows, the
central oriel on 3 tall carved brackets. Further later
extensions southwards.
INTERIOR: the ground floor has been considerably modified in
detail, but many items of original detail remain scattered
through the building. The large room to the right has 2 rough
chamfered transverse beams and a C20 fireplace, and is entered
through the 4-centred doorway from the throughway. In the rear
half is a late C16 chamfered and stopped beam. One room in the
wing has one very large rough chamfered beam and a C19
fireplace. The staircase from ground to first floor is of the
C20. Within the former throughway is a late staircase, and to
the left is a smaller room.
At first floor bedroom 2 includes 2 full-width moulded C16
beams. At the junction between the front range and the wing
the upper stair is a dog-leg with splat balustrade, square
newels and solid string. The main front rooms have plaster
frieze and cornice; bedroom 9 has an exposed wind-braced roof,
with very steep chamfered braces and heavy purlin to run-out
stops, and room 11 a C16 stone fireplace with 4-centred arch.
The wing has a corridor to the W (right) side, crossed by
beams running through from the bedrooms.
HISTORICAL NOTE: these premises, with Nos 8 and 10 (qv) were
rebuilt in the late C16 by a canon resident in the Canonical
House (The Exchequer) on the site of the Town Hall (qv), in
what was then his garden. A small plaque on the front
elevation states that William Penn preached here.
(Town and Country Planning Working Papers: Scrase AJ: Wells: A
Study of Town Origins: Bristol: 1982-).