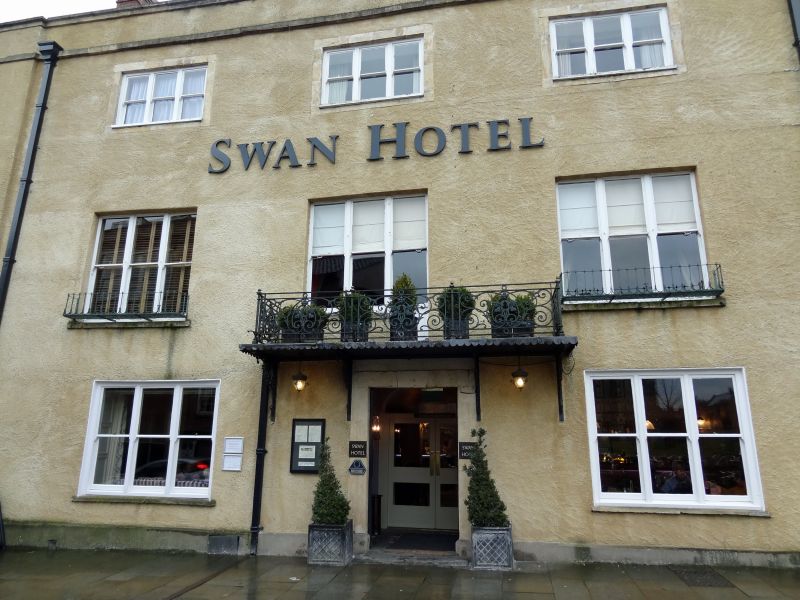 Hotel. C16 or earlier, substantially restructured and
refronted late C18 or early C19, rear wing rebuilt 1885.
Roughcast, with rendered plinth, brick stacks and rear wing,
slate roofs.
PLAN: the original plan had a through carriageway at the
centre, now enclosed, to a stable yard, and wing to the right;
the carriageway now enclosed, with a new wide entry to the
left of the main range, under a 2-bay extension. There are
some earlier buildings to the rear,left, connected at the
upper level with the main range. The principal staircase lies
to the left of the entrance hall, behind the main front
lounge.
EXTERIOR: 3 storeys, 2+3 bays, the two bays to left over
throughway with flat-arched full width opening with shallow
signboard over, the first-floor windows of 12-pane sashes in
plain openings, with small curved balcony fronts in delicate
early C19 cast-iron; the second floor has 9-pane sash windows.
The main 3-bay section has composite 3-unit sash windows
without glazing bars, those to ground and first floors
relatively deep, first-floor bays 1 and 3 have small cast-iron
balconies, and second-floor windows have a plain rendered
architrave. To the centre bay at ground floor is a pair of
half-glazed doors in plain painted stone architrave, above
which is a large square balcony, mostly in cast-iron, with a
wide planked deck on 4 cast-iron brackets.
The words "Swan Hotel" in large wooden letters are secured on
battens between first and second floors, and between the two
left-hand bays at first floor level is a carved wooden swan on
an ornamented cast-iron bracket. Above the second-floor
windows is a plain stone band, below the blocking course with
moulded stone parapet; the main roof has coped verges, with a
stack to each gable.
The rear wing is dated 1885, with an upper floor in
cavity-wall brickwork panels between timber posts oversailing
the ground floor in a jetty, on heavy square beams, and with
sash windows.
INTERIOR: the ground-floor room to the left has an abbreviated
9-compartment ceiling with C16 moulded beams; the wide C16
stone fireplace was brought in from a building in Frome in the
late C20. To the right the bar has three early C16 moulded
beams, with exposed early close-set heavy floor joists
carrying wide floor-boards running in the same direction, and
a late C19 stone fireplace, the latter imported c1970, as was
the fine linen-fold panelling (from Devon) in the long dining
room to its rear. The through entrance hall has a coved
ceiling of c1970, and to the left is the wide late C18 dog-leg
hardwood staircase with solid strings and turned-on-square
balusters, to Doric newels. Details in the upper floors are
generally C19 or C20; one bedroom (23) retains 2 deep
chamfered beams of the C16 or C17.
The first-floor front room runs the full width of 3 bays of
the principal range, but retains no detail of historic
interest.
There are extensive cellars; the front section left has a very
heavy chamfered and stopped beam, and to the right, extending
under the rear wing, stone flat segmental vaults, with cobble
or stone flag floors. Roofs not accessible for inspection, but
likely to be late rebuildings.
SUBSIDIARY FEATURES: the attached outbuildings to the rear,
left, include remains of a rubble and tile C17 cottage.