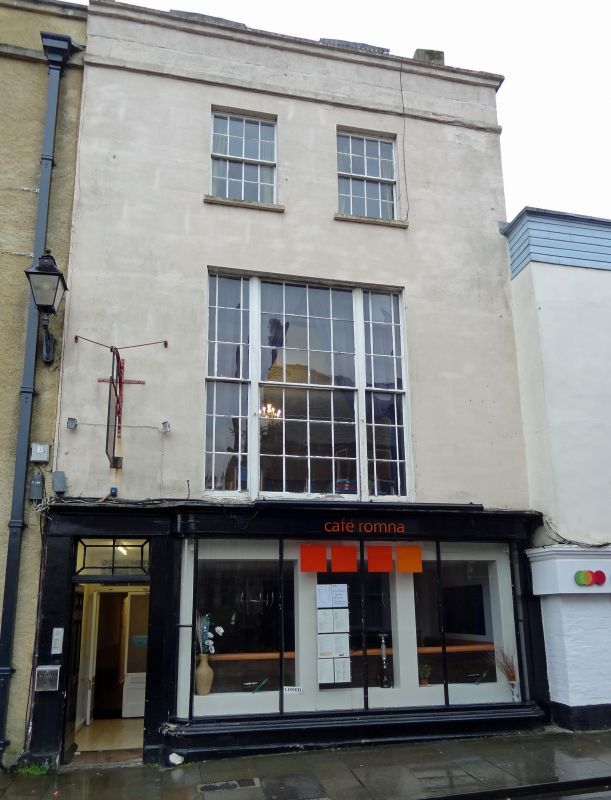 Shop and offices, former house. Early C19. Ashlar stonework
facade, rendered rubble to side gable, Welsh slate roof behind
parapet, brick chimney stack.
PLAN: double-depth, with through passage to the left, and
straight flight principal staircase to its right; at the rear
are various large extensions, mainly mid or late C20.
EXTERIOR: 3 storeys with attic and basement, single wide bay.
Late C19 shop front across whole of ground floor, in 4 large
vertical panes with very thin deep mullions, and narrow curved
returns at the ends, with small fascia and very shallow
cornice, continued over the 6-panel door under rectangular
fanlight with margin-panes.
First floor has a very large tripartite sash window, of 6+24+6
panes, the outer sashes with margin panes, and two 16-pane
sash windows to second floor, over which is band course and
parapet; 2 flat-roofed dormer windows are just visible behind
the parapet.
INTERIOR: there is a series of large rooms, with high
ceilings, especially at first floor, and generally very sparse
detail. The property was evidently completely rebuilt, and no
earlier fabric or detail could be found.
The stone-flagged throughway has an inner lobby with panelled
door and transom-light similar to the outer detail. The broad
straight-flight stair is well set back, with open string to
scrolled ends, stick balustrade and mahogany handrail, carried
through 2 floors, but reducing in scale to the top floor; at
the first landing is a very large 16-pane sash to the left
party wall. The principal first-floor room has a central
ceiling rose and moulded cornice, and a dado and frieze in
embossed varnished paper.
The front top-floor room has a coved ceiling. The basement is
very extensive, with rubble walls and stone flagged floor,
approached by a straight flight of stone stairs. At the rear a
wide opening, with a pair of doors in a fluted surround, has
been blocked with concrete blockwork.
HISTORICAL NOTE: the very large first-floor window suggests
former use as an assembly room or similar, possibly as an
extension to the adjacent Swan Hotel (qv).