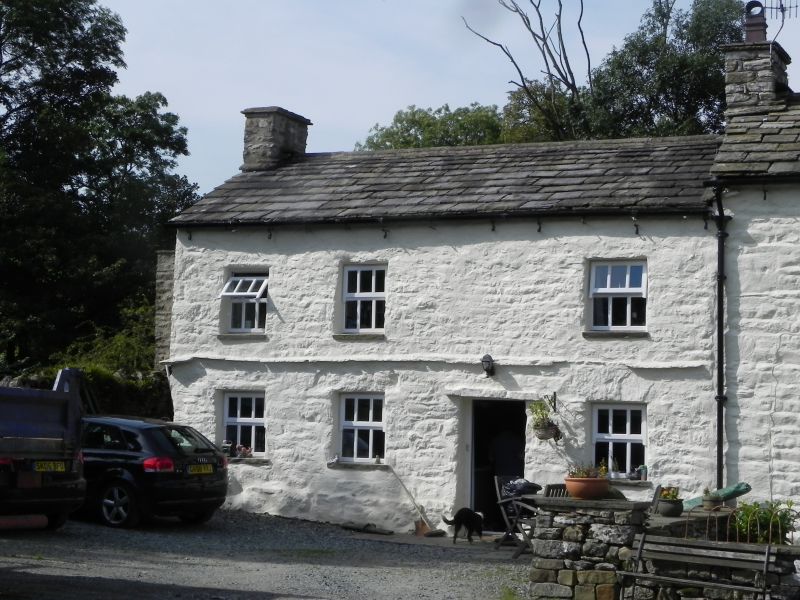 Farmhouse now store, and later attached farmhouse now
unoccupied. Probably late C17 or early C18, and later C18,
respectively, and the latter extended to the rear. Both
portions of white-washed random rubble with quoins, stone
slate roofs on 2 levels. Linear plan on north-south axis
facing east, with the older and smaller portion to the south.
EXTERIOR: earlier portion: single depth and formerly 2 small
units. 2 low storeys and 2 windows, with a stone slate
drip-course over the ground floor, a square-headed doorway
offset to the right, with a projected stone lintel; a small
former fire-window near the left corner, a small window to the
left of the doorway altered as a doorway and a small loading
doorway above that, and a small oblong 6-pane fixed window on
each floor to the right. The left gable has a cut-down
corbelled chimney. The rear wall has a doorway but is
otherwise blind.
Later portion to right: single-depth 2-unit plan with a large
L-shaped outshut added to the rear. 2 storeys and 3 windows,
symmetrical, with remains of a former gabled stone-slab porch
framing a square-headed doorway in the centre with C20 glazed
door, two 6-pane sashes at ground floor and 3 matching sashes
above, and gable chimneys. At the rear the deeper northern
portion of the outshut has a square 9-pane window in its rear
wall and a doorway in the re-entrant; the other portion has a
tall cross-window to the staircase, with glazing bars.
INTERIOR: not inspected but 2 axial beams with run-out chamfer
visible in north room; dog-legged staircase with stick
balusters, and some fielded panelling.